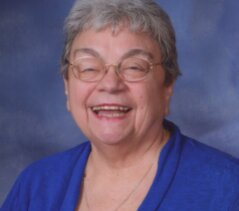 Woodside Agnes Irene (DesJardin) Ahola, a former resident of Pilgrim Road, Houghton; Woodside Lane, Dollar Bay; and The Bluffs, Houghton; left for her heavenly home on Sunday, February 7, 2021, with her daughter at her side. Born on March 24, 1937, in her family home in Hubbell, Agnes was the 13th child of Emile and Celina (Perreault) DesJardin. She grew up in Hubbell where she attended the St. Cecilia School and graduated from Lake Linden High School in 1955. After graduating, Agnes worked at JC Penneys in Calumet until she married Frederick (Fritz) Ahola on September 17, 1955. The couple moved to Lincoln, Nebraska, where Fritz was stationed in the United States Air Force. Their first two (of 7 ) children were born in Lincoln and in 1958 Agnes and Fritz returned to the Copper Country, residing on Pilgrim Road on Fritzs family farm until after retirement when they moved to Woodside Lane in Dollar Bay. Agnes was employed by Michigan State University as the first female program assistant for Houghton and Keweenaw Counties 4-H. She was also the first manager for the Houghton County Fair. In addition, Agnes worked as a Religious Education Coordinator at St. Ignatius Catholic Church and as a Pastoral Assistant at St. Albert the Great. Throughout the years Agnes was also self-employed by Stanley Home Products, Avon, and Pampered Chef, and she sold a lot of homemade Thimbleberry jam that the family made together. Agnes was a dedicated volunteer, serving the Dial Help Crisis Center for 25 years and 4-H for a total of 50 years. She was also active in many groups and organizations including the FCE (Family Community Education - Formerly Extension Homemakers), Noteworthy Singers, Aqua Fit-Wellness Center, The Red Hats, The Catholic Order of Foresters and St Ignatius Catholic Women. Agnes enjoyed people of all ages. She was an avid crocheter and crafter and won Homemaker of the Year and Best of Show awards at the Houghton County Fair many times. She was well-known for her crocheted scrubbies, which she gifted generously to all. She touched many lives and is remembered for her warm smile, kind heart, and generosity. Agnes is survived by her 6 children, 16 grandchildren, and 17 great-grandchildren. Daughter Vicki (Mark) Little of Tapiola and their 2 sons, Mark (Krystal) and Jay, and their children, Megan, Jake, Vera, and Ryder. Son Ricky (Sandra) Ahola of Houghton and their 5 children, Amy (Allan Johnsen), Philip, Nathan (Heather), Amber (Bryce) Tuttle, Erica (Eric) Bates and their children, Dane, Tori, Taylor, Denny, Noah, Antionette, Damian, David, Elizabeth, and Wyatt. Son Jon (Laura) Ahola of Portage, Wisconsin, and their 3 children, Zachary (Alexis), Kaelyn, and Maxwell. Daughter Dawn (Michael) Guzak of Battle Creek, Michigan, and their 3 children, Charles (Rachel), Kristine (Nick Johnson), and Emilee, and Krissys son Gideon. Daughter Mary (Daniel) Crane of Chassell and their 2 daughters, Amanda (Eric) Deyaert and Rachel, and Amandas 2 daughters, Kinsley and Delaney. Sandy Allen (Israel Alfonso) of Miami, Florida, and her daughter Ashley. Grandchildren and great-grandchildren were precious gifts and great joys to Agnes. She was an aunt to many nieces and nephews who held a special place in her heart. She was preceded in death by her husband Fritz (2019); son Frederick William Jr. (1962); five DesJardin brothers: Emil, Frances, William Paul, Raymond, Joseph; seven sisters: Emily (DeCourcy), Theresa, Louise (Buchmoyer), Marie (Burgess), Madonna (Kajander), Helen (McCormick), Anne (Ullery), and many other relatives and friends. A Christian memorial mass will be celebrated in her honor at St. Ignatius Church in Houghton, Michigan, at a later date. PLEASE SEND NO FLOWERS: she enjoyed her flowers when she was alive and often said, I cant smell them when I am gone. In lieu of flowers, donations can be made to 4-H, SKY (Simple Kindness for Youth), or Little Brothers Friends of the Elderly. To view Agness obituary or to send condolences to the family please visit www.memorialchapel.net. The Memorial Chapel & Plowe Funeral Homes of Hancock are assisting the family with the arrangements.
To order memorial trees or send flowers to the family in memory of Agnes Ahola, please visit our flower store.