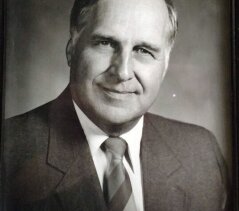 HOUGHTON-"Willie" Alfred William Johnson, 88, passed away on March 16, 2020 at UP Health Portage Hospital. Willie was born June 29, 1931 in Laurium, the son of the late Ralph and Aleda Johnson, whos family lived at Highway Location and then in Bruce Crossing, as farmers. Willie was united in marriage to the former Luella D Syria in 1950, who passed away in April 2010. Willies first job was taken after completing 8th grade. He quit school to become the Farm Boss on the family farm and said it set the stage for hard work for his whole career. Willie worked various jobs in his earlier years: for Ontonagon Valley Creamery, The Korsman Lumber Supply in Bruce Crossing, as a butcher at The Locker Plant in Ewen, and a teller for the State Bank of Ewen. In 1957 he and Luella opened a Variety Store in Bruce Crossing. In 1958 he moved the store to Ewen. Eventually that business expanded. He built a new Variety Store which housed the Secretary of State office & a community cafe. The Variety Store endeavors brought Willie a silent partner and mentor, Bill Malner. Bill and Willie entered into business upon what Willie called, an Abe Lincoln hand-shake agreement. In 1968 he began to sell vehicles at Gils Auto Exchange and in 1969 became instrumental in developing Big Valley Ford car dealership in Ewen. Ford Motor Company had rewarded Willie & Luella with trips to several countries. He sold it in 1980 to a partnership that included his son Douglas and moved to Florida with Luella where he worked for Velde Ford(now Mullinax Ford)in Vero Beach. In 1985 he moved back to the Upper Peninsula and became the owner of Copper Country Ford Lincoln Mercury. He loved being back in the U.P. His goal was to make his customers feel heard & respected & served well. He believed in training his personnel and strived to keep 23 families working in this area. On his business card until he retired were the words "Be nice to people." He reminded us that everyone is wise about something whether they were academically educated or not. Willie liked a quote from Charles R. Swindoll, " Our attitude is the only string we have to play". Willie and Luella served the community and embraced many children as their own, who they welcomed into their home. They sought out friends who lived alone, to join them at Holiday Dinners. Willie and Luella started the Sunday School in The Bruce Crossing Apostolic Lutheran Church where they were active and a loving influence for many years. Willie was also a Boy Scout Leader. He was President of Ewen Development Corporation. He and Luella worked hard to start Ewen Medical Clinic. They visited nursing homes and provided Finnish and English music for residents. Willie helped Little Brothers in the Copper Country area to deliver Holiday meals & gifts, a tradition that several of his grandchildren now enjoy. He would purchase items and send boxes to Iraq. He was committed to helping the Wounded Warrior Project. He is survived by his children Jacqueline (Kenneth) Kangas, Chassell; Toni (Michael) Applekamp, Bergland; Catherine (Richard) Wainio, Ewen; Mark Johnson, various locations United States; David(Paula) Johnson, Hancock; his daughter-in-law Kathy Johnson Bruce Crossing, his brother John(Hazel)Johnson Houghton, sister Suzanne(Keith) Sackett of Keweenaw Bay, sister-in-laws Katherine Johnson of Hancock & Gladys Johnson of Seattle, 12 Grandchildren, Gina(Ted Klahn),Jed Hammond, Jana(Kevin)Mokros, Ginelle(Zac)Nagel, Jeremy(Kara) Applekamp, Jarvis(Angela)Applekamp, Gabriel(Marisella) Applekamp, Michelle(Josh)Scott, Kerielle(Michael)Lind, Ian(Shannon)Wainio, Christina(Cody)Kangas, Jessica(Cole)Klein, Meghan(Cory)King,1 Step-Granddaughter Ashley Niemela(Scott Kratz), 51 Great Grandchildren, & 13 Great Great Grandchildren and numerous nieces and nephews. Preceding him in death were his parents, his son Douglas Johnson, his siblings; Ralph Elsworth (Jerry), Donald Matthew (infant), Lewis Emil, Howard Leland, Burton Ward, Raymond Harold Patrick, Wesley Herbert Michael, Franklin Delano, Henry Alexander, Charles Edward (infant), Barbara Joy, Aleda Patricia, Grace Ann (infant) and Great Grandson Andrew Klahn. Willie once wrote: We are capable of more love and kindness, each of us, as moments pass and tick away from our life. Give more as we have a chance to give, in each moment, as our last is soon approaching. Kindness does not cost anything. He had a very positive attitude. He loved telling jokes. He was quoted as saying, Dying cant be all that bad. I have not seen anybody that has passed, complain about it yet! Willie's family would like to thank the personnel at U.P. Portage Health, The Lighthouse in the last months, & Portage Home Health Services, & The Bluffs for the care they gave to Willie over the last years. Memorial Chapel and Plow Funeral Home are assisting the family with the arrangements. A funeral and celebration of his life will be announced later in the spring at Zion Lutheran Church in Hancock. He will then be laid to rest beside his beloved Luella at the Hillside Cemetery of Bruce Crossing. In lieu of other expressions of sympathy Willie requested, memorials may be directed to: Ontonagon County Cancer Association P.O. Box 282, Ontonagon, MI 49953 in memory of his son Douglas Dean Johnson. To view Willies obituary or to send condolences to the family please visit www.memorialchapel.net.
To order memorial trees or send flowers to the family in memory of Alfred Johnson, please visit our flower store.