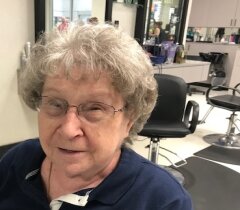 Alice L. Gerzetich, 91, a resident of Painesdale, passed away Friday, May 20, 2022, at the Omega House in Houghton with her family by her side.

She was born on December 16, 1930, in Trimountain, MI, a daughter of the late Arne and Aune (Taipoli) Hovey. Alice was raised in Painesdale and attended the Jeffers’ School.

Following school, Alice worked in Manitowoc, WI, as a nanny and in Chicago, IL, at Western Electric.

On December 3, 1949, Alice was united in marriage to her perfect match William “Bill” Gerzetich. The couple resided in Chicago before moving to make their home in Painesdale. On September 8, 2004, Bill preceded her in death.

In the 1970’s, Mrs. Gerzetich had accepted a job as a cook for the Jeffers’ school which she continued into her 70’s. She enjoyed visiting with the students each day and was able to leave a lasting impression. In 2002, she was honored to have the High School yearbook dedicated to her. Alice also was a bit of a social butterfly visiting with family and friends at any given chance. Her family always came first in her life and she enjoyed the look on the faces of her children and grandchildren each time they would receive a gift that she had gotten for them.

Preceding her in death were her husband Mica, her parents, her sister Shirley Hampton, Her brothers: Donald Hovey and Paul Kostamo.

A prayer service for Alice will be held 1:00 pm Friday, May 27, 2022, at the Memorial Chapel Funeral & Cremation Service Mt. View Chapel of South Range with Fr. John Martignon to officiate. Burial will be in the Mt. View Cemetery of South Range.

Friends may call on Thursday, May 26, 2022, from 5 to 8:00 pm at the Memorial Chapel Funeral & Cremation Service Mt. View Chapel of South Range and on Friday from 12 noon until time of services at the funeral home.

Alice’s family would like to thank the staffs of UP Health – Portage, Canal View – Houghton County and the Omega House for the care and attention given to her during her stays.

To view Alice’s obituary or to give condolences to the family please visit www.memorialchapel.net

The Memorial Chapel Funeral & Cremation Service Mt. View Chapel of South Range, is assisting the family with the arrangements.
To order memorial trees or send flowers to the family in memory of Alice Gerzetich, please visit our flower store.