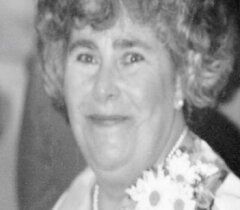 Barbara A. Carter a resident of Hancock fell asleep in death on September 6, 2022, at the UP Health Systems-Portage Hospital.

She was born on February 13, 1936, in Minneapolis, MN, a daughter of the late Loftus and Ethel Newll. In 1951, the family moved to the area of Dallas, Texas. Barbara graduated from Pleasant Grove High School in 1954. She learned to play the piano. One piece she was working on was very difficult. She would practice and practice. Outside of the open window, a mockingbird heard her practicing. Soon the bird learned the music and could sing it! She had other talents and skills. However, these were integrated with her serving her God, Jehovah and being a disciple of Jesus Christ.

Barbara spent half of her growing years watching her parents study the Bible and acting on what they learned. When she was 10 years old, she witnessed her parents being baptized in the spring of 1946. She took their experience to heart. She did her own personal study of God’s Word and made Bible truth her own. On March 16, 1952, Barbara became one of Jehovah’s Witnesses by symbolizing her dedication by water baptism.

She was a skilled seamstress. She managed the sewing department Paul Osborne and Associates who designed shows for Six Flags, Disneyland, Cypress Gardens, Great Adventure and many other theme parks across North America. They produced all the Warner Brothers costumes and shows for all over the world. They specialized in creating characters, designing the costumes, puppets, magic show props and sets. They also designed props, sets and illusions for Broadway productions and many network television specials.

She also made costumes for theocratic dramas given at conventions of Jehovah’s Witnesses. She had the ability to look at a picture of a costume or dress, then create a pattern, and then make the article of clothing or the character itself.

After her husband left her, Barbara’s father & mother moved in with her to help with expenses. In time, Barbara became their caregiver until their death.

In 1998, Barbara and her mother, Ethel Newell, moved to the Copper Country, settling into a home in Laurium. For many years, their home served as a place for a congregation Bible Study, and meeting place for the public ministry. She was known for her generosity and hospitality to all in the congregation.

She died after being, in the now Mission Point nursing home, for many years. They enjoyed her and gave excellent care for those years. She remained faithful to her creator and God Jehovah. She looks forward to the resurrection as Jesus promised in John 5:25-29. All those who knew her look forward to then seeing her again.

To view Barbara’s obituary or to send condolences to the family please visit www.memorialchapel.net.

The Memorial Chapel Funeral & Cremation Service – Hancock Chapel has been assisting the family with the arrangements.
To order memorial trees or send flowers to the family in memory of Barbara Carter (Newell), please visit our flower store.