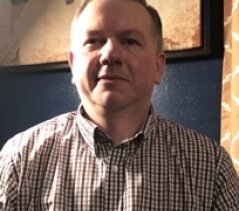 Hancock Barry James Givens, 49, a lifelong resident of Hancock passed away on Monday, March 9, 2020 at Bellin Hospital in Green Bay, WI following a lengthy illness. Barry was born on March 30, 1970 in Hancock, a son of the late Bernard W. Bill Givens and Linda (Komula) Givens. He attended the Hancock Public Schools and was a graduate in Hancocks class of 1988. After high school he attended Michigan Tech University and was a 1993 Cum Laude graduate with course concentration in construction and structural engineering. He earned a Bachelor of Science degree from MTU in Civil Engineering. On May 27, 2005 he was united in marriage to the former Laura Hiltunen. Barrys career in engineering began in 1993. He worked for nine years as a Civil Engineer for Hitch, Inc. before accepting a Civil Engineer position with the Western U.P. District Health Department in July 2002. In October 2004 Barry was hired by Moyle Construction and Development as a Project Manager/Engineer. He was promoted to Director of Design in May 2006 followed by a second promotion to V.P. of Engineering and Design in January 2009. In November 2010 he accepted the position of Vice President at Division1 Design. An engineering career spanning over 25 years he was especially proud of his work on projects within the healthcare field. Projects for clients such as War Memorial Hospital, VA Outpatient Clinics, Portage Health System, Bellin Health, Keweenaw Memorial Medical Center, and Baraga County Memorial Hospital. He exited the full-time engineering arena with his acceptance of the Hancock City Manager position in December 2019. A position he held until his passing on March 9, 2020. Along with Barrys professional experience he was well known in the community for his civic duties. He was the Hancock City Mayor for four years and served on the Hancock City Council. He was an MTU Smart Zone LDFA Board member, a Portage Lake Water and Sewage Authority Board member, and served on several committees for the City of Hancock including: Master Plan Steering Committee; Planning Commission; Personnel and Finance Committee; Recreation Commission; Houghton County Arena Fundraising Committee; and Hancock Public Schools YES Committee. Barry was a founding member of the Hancock Transit Authority; a Copper County Junior Hockey Association Volunteer; and provided tremendous support for all of the athletic programs at Hancock High School. He was preceded in death by his father. Surviving are his mother, Linda Givens of Hancock; his wife, Laura, at home; a sister, Pam Givens of Hancock; three brothers, Greg (Wanda) Givens of Hancock, Tim (Sheryl) Givens of Hancock, and Chris Givens of Traverse City; four children, Bryce Givens of Marquette, Cam Murray of Hancock, Taylor (Joe) Hyrkas of Brighton, Chelsea Murray of Norfolk, VA along with several nieces, nephews, and cousins. Funeral services for Barry will be held Monday, March 16, 2020 at 1:00pm at the Zion Lutheran Church in Hancock with Pastor Jessie Aho to officiate. Spring burial will be in the Lakeside cemetery in Hancock. Friends may call at the church from 4 to 8 pm on Sunday, March 15 and from noon until time of services at the church on Monday. In lieu of flowers or other expressions of sympathy the family invites you to participate in Givs Day on March 30, 2020. Please set aside one hour of your day to volunteer in the community in honor of Barry. To view Barrys obituary or to send condolences to the family please visit www.memorialchapel.net. The Memorial Chapel & Plowe Funeral Homes of Hancock have been assisting the family with the arrangements.
To order memorial trees or send flowers to the family in memory of Barry Givens, please visit our flower store.