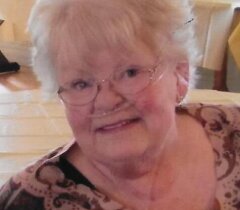 Obituary of Betty Jeanne Mattila Painesdale Betty (Robert) Mattila, 71, a resident of Painesdale, passed away Thursday evening November 26, 2015, at the UP Health Systems - Portage following a short illness. She was born on July 29, 1944, in Trimountain, a daughter of the late Alva Babe and Verna (Linna) Smith. Betty was raised in Painesdale and was a graduate of the Jeffers High School with the class of 1962. On August 11, 1962, she was united in marriage to Robert Mattila. The couple has resided in Painesdale since that time, where they raised their three children. Betty was a member of the former Painesdale Apostolic Lutheran Church. She had worked as a nurses aide for the Houghton County Medical Care Facility and Cypress Manor, along with being a private home health aide. She also worked nights for K-mart helping to restock inventory. Her true love was caring for and spending time with her family. She also enjoyed cooking, sewing and knitting for her family. Preceding her in death were her parents, her brother Clyde Smith and her sister; Marian Sis Erickson. Surviving are: Her husband: Robert Mattila of Painesdale Her children: Robert Mattila Jr. of Dickeyville, WI Debbie (Jean Orgas) Mattila of Palmyra, WI Connie (Scott) Wright of Dickeyville, WI Her grandchildren: Maggie & Kylie Wright Numerous in-laws (out-laws), nieces, nephews, and cousins Funeral services for Betty will be held 12 noon Monday November 30, 2015, at the Memorial Chapel Funeral Home of Hancock with Pastor Rodney Johnson to officiate. Spring burial will be in the Mt. View Cemetery of South Range. Friends may call on Monday November 30, 2015, from 10 am until time of services at the Memorial Chapel Funeral Home of Hancock. To view Bettys obituary or to send condolences to the family please visit www.memorialchapel.net. The Memorial Chapel & Plowe Funeral Homes are assisting the family with the arrangements. To send flowers to the family of Betty Mattila, please visit Tribute Store
To order memorial trees or send flowers to the family in memory of Betty Mattila, please visit our flower store.