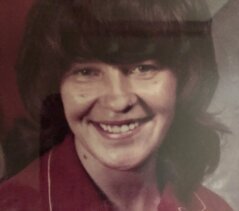 Beverly Joann Wampler Cook Hyttinen was born on March 25, 1945, to Robert and Irene Wampler at home on the farm in Hecla, SD. She was the youngest of the identical twin girls. She lived on the farm with her twin sister, Vivianne brother John, and sister Barbara. They all went to country school through the third grade. They moved to Aberdeen to live with their Aunt Mill and Uncle Ken after their parents passed away. They were thankful they took them into their family. They all graduated through the Aberdeen school system.

Joann then moved to Michigan with her cousin and met her first husband, Chad's father, Dave Cook. They were married and adopted their son Chad. They lived in St. John's Michigan. They then moved to their home in Hancock, Michigan.

Joann worked at the nursing home for many years and loved working there. Later she married Butch Hyttinen and moved to Atlantic Mine, Michigan.

She is preceded in death by her parents, Robert and Irene, brother John, and sister Barbara.

She is survived by her husband Butch, son Chad, twin sister Vivianne Schaeffer, and many nieces, nephews, and great-nieces and nephews.

A graveside blessing for Joanne will be held 2:00 pm Friday June 3, 2022, in the Liminga Cemetery.

To view Joanne's obituary or to send condolences to the family please visit www.memorialchapel.net.

The Memorial Chapel Funeral & Cremation Service of Hancock has been assisting the family with the arrangements.
To order memorial trees or send flowers to the family in memory of Beverly Hyttinen (Wampler), please visit our flower store.