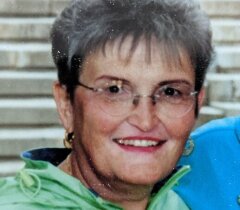 Obituary of Bonnie Joyal Dollar Bay Bonnie Joyal, 84, a resident of Dollar Bay passed away Wednesday July 10, 2019, at the Houghton County Medical Care Facility in Hancock following a short illness. She was born on March 11, 1935 in Detroit, the daughter of the late Royce and Dorothy (Baer) Weideman. She was raised in Hart and graduated from the Hart High School with the class of 1952. Following graduating, Bonnie attended the Edward W. Sparrow School of Nursing for 3 years becoming a Registered Nurse. She began working at St. Lawrence Hospital in Lansing and eventually began her career at Lansing Ob/Gyn where she would remain until retirement. During Bonnies time as an RN, she met a car accident patient at the hospital. His name was Douglas Joyal, and the couple married on September 14, 1956. The Joyals had moved to Big Rapids while Douglas attended Ferris State University. They then moved to East Lansing where they would raise their family. Following retirement, the couple moved to Arizona for a winter and then eventually moving to Douglass hometown of Dollar Bay. Bonnie was a member of First Lutheran Church in Dollar bay. She volunteered in the Gift Shop at Portage Health and played a key role in the development of the Dialysis Unit there. She also was a parish nurse. Bonnie was a member of a womens chorus call Sweet Adelines. Her Quartet Electric Chords went on to compete in London, Boston and Seattle. Besides her parents, Bonnie was preceded in death by her husband Douglas, Her daughter Lynn Claudette, and a sister Becky. She is survived by her children; Michael (Marie) of Dollar Bay Laine Maxson of Dollar Bay Mark (Florence) of Ripley Lisa (Donald) McGehee of Okemos, MI 18 grandchildren, 24 great-grandchildren. She is also survived by her sister Judy Murbach of Dollar Bay, a son-in-law Michael Curl of Dimondale, MI and numerous nieces, nephews and cousins. Funeral Services for Bonnie will be held 11am Tuesday, July 16, 2019 at First Lutheran Church in Dollar Bay with Vicar Micah Cavaleri officiating. Friends may call on Tuesday, July 16, 2019 from 10am until the time of services at the church. To view Bonnies obituary or to send condolences to the family, please visit www.memorialchapel.net. The Memorial Chapel & Plowe Funeral Home of Hancock is assisting the family with the arrangements. To send flowers to the family of Bonnie Joyal, please visit Tribute Store
To order memorial trees or send flowers to the family in memory of Bonnie Joyal, please visit our flower store.