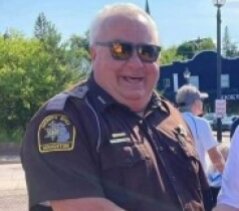 Houghton Brian J. Slim McLean, 63, well-known resident of Houghton and longtime Sheriff of Houghton County, passed away Tuesday, July 20, 2021, at UP Health System- Marquette with his family by his side. He was born on January 23, 1958, in Hancock, a son of the late John and Catherine (McCarthy) McLean. Brian was raised in Houghton and was a graduate of the Houghton High School with the class of 1976. Slim began working at a young age, starting with Webers Sporting goods, the Pic and Lode Theaters and the Tee Pee Restaurant. After High School, he worked for the City of Houghton Public Works Department until beginning a career in Law enforcement. In 1978, he began working for the City of Houghton Police Department. In 1982, he became a deputy for the Houghton County Sheriffs Department. In 1996, Mr. Brian McLean became the Sheriff for Houghton County and to this date was the longest-running Sheriff of Houghton County With 26 years served to Houghton County. On August 29, 1981, Brian was united in marriage to the former Kelly Smith. The couple resided in Chassell and Houghton while raising their family. Mr. McLean was a member of Peace Evangelical Lutheran Church of Houghton. Mr. McLean was very active in the community over the years serving on many committees and boards. He was also active with the Michigan High School Athletic Association being a referee for over 30 years. Slim had many hobbies and interests such as coaching womens hockey with the Houghton Angels in the early 70s and his daughter with the K-Wings in the 00s. He played Monday and Thursday Hockey 60 and over rentals along with playing in the Calumet Hockey League, he was an avid golfer playing the Portage Lake Golf League. Slim enjoyed sharing with family and friends his love for cooking and baking. His loaves of bread brought comfort to people during their times of joy and sorrow. He was very active with the Knights of the Round Table. His warm smile and belly laugh would welcome all. Brian was always very proud and happy with all of the relationships he gained while being the Sheriff of Houghton County. The Highlight of Sheriff Brian McLeans career was serving in 2009 as President of the Michigan Sheriffs Association. He was involved with all aspects with the Michigan Sheriffs Association during his 26 years as Sheriff. Preceding him in death were his son Alex; his parents; and his sister: Kathy. Surviving are: His Wife Kelly McLean His children: Samuel McLean of Chicago, IL Katelyn (Alexandra Ciacco) McLean of Mound, MN His twin brother: Bruce (Lesley) McLean of Houghton His sisters: Susan Turner of Atlantic Mine Cynthia McLean of Houghton Amy OConnell of Dodgeville Numerous Aunts, Nieces, nephews and cousins. A memorial service for Slim will be held 2:00 pm Saturday, July 24, 2021, at the Rozsa Center for the Performing Arts on the Michigan Tech Campus with Rev. Glenn Schwanke to officiate. Burial will be in the Forest Hill Cemetery of Houghton at a later date.Visitation will be from 10am until 2pm at the Rozsa Center for the Performing Arts on Saturday, July 24, 2021. For those who are unable to attend, the service for Sheriff Brian McLean will be live-streamed through the Rozsa Center Facebook at https://www.facebook.com/RozsaCenter/ To view Slims obituary or to send condolences to the family please visit www.memorialchapel.net. The Memorial Chapel Funeral Home of Hancock is assisting the family with the arrangements.
To order memorial trees or send flowers to the family in memory of Brian McLean, please visit our flower store.