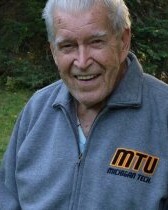 Obituary of Calvin Ojanen Calvin E. Ojanen passed away peacefully at his Livonia, MI home Saturday, May 4, 2019. Born August 28, 1926 in Chassell, Calvin was proud of his Finnish heritage and growing up in the rugged upper peninsula of Michigan. He served as an Army drill sergeant in WWII. Thanks to the GI bill, he completed his Electrical Engineering degree at MTU. Calvin married the love of his life, Ruth (Haarala), on June 16, 1951. He enjoyed woodworking, deer hunting, walking at the mall and baking nisu and pasties. Calvin built their home, had a private pilot's license, worked his entire career at Detroit Edison and lovingly cared for Ruth at home during her final 5 years. Calvin and Ruth were blessed with four children: Randy (Sue), Michael (Helena), David (Ruth) and Diane (Bruce); 11 grandchildren and 8 great-grandchildren. Preceding him in death was Ruth, his wife, and Calvin's nine older siblings. A grave-side service will be held in the Chassell Cemetery on Tuesday, May 14 at 10:30 am with Rev. Soren Schmidt to officate. To send flowers to the family of Calvin Ojanen, please visit Tribute Store
To order memorial trees or send flowers to the family in memory of Calvin Ojanen, please visit our flower store.