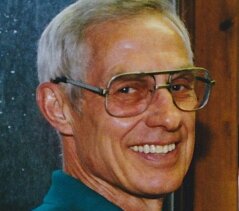 Obituary of Carl Emil Dewald Franklin Township Carl E. Dewald, 81, a resident of Franklin Township, Houghton County, MI passed away Wednesday evening February 10, 2016, at UP Health – Portage due to complications of prostate cancer and heart disease. He had been a patient for the past 4 days. He was born on the family farm July 25, 1934, near Twining, MI, a son of the late Mike and Anna (Geda) Dewald. Carl was the middle child, with older brothers Edwin and John, sister Wilma, and younger brothers Robert and James. He was an especially close friend and confident of Bob and Jim growing up during their school years. Carl graduated from the Arenac Eastern High School in the class of 1952. While a student at Michigan State University Carl enlisted in the United States Army during the Korean War, opting to train as a paratrooper and being assigned to the 82nd Airborne Division. The cease-fire was declared, however, before he saw combat. After discharge he attended Central Michigan University and later transferred to Michigan College of Mining and Technology, graduating in 1961 from with a Bachelor of Science in Mechanical Engineering. Carl was first employed by the Union Carbide Company in Charleston, WV but achieved his wish of employment with Dow Chemical Company in 1965 in Midland, MI. In 1969 he was transferred to a Dow plastics plant in Findlay, OH. While there he received a patent for a method of printing on molded styrene cups. In 1974 he accepted a transfer to the Dow Ludington, MI complex to manage the construction of a natural gas sweetening plant, then continued on, overseeing various construction and maintenance projects until his retirement in 1998. On June 25, 1960, he was united in marriage to the former Marilyn Martin. The couple was one of the first tenants of Danielle Heights before moving to W. Virginia. They returned to the Copper Country in 2002. On August 27, 2004 Marilyn preceded Carl in death. While working on a snow statue in 1960 Carl fell and shattered his right ankle. Although receiving the best treatments available at the time, this injury continued to plague him throughout life, eventually necessitating amputation of his foot in 2010. Despite this, Carl was devoted to a habit of physical fitness, continuing a daily routine of exercise established while in the Army. As an alternative to running Carl became an avid bicyclist, first commuting to work, then riding for fitness and participating in many tours and cross country rides. A long time member of the League of Michigan Bicyclists, he participated in the National 24 Hour Bike Challenge 11 times, the annual DALMAC Lansing to St. Ignace tour 20 times and was a founding organizer of the annual Shoreline West Bicycle Tour. In 1999 he completed a 3010 mile tour across the USA from San Diego, CA to St. Augustine, FL. He kept a log book, documenting over 100,000 miles of riding. Wherever he resided, Carl was very active in church and community. While in Ludington he was a member of St. Johns Lutheran Church and later a founding member of Peace Lutheran Church, serving there, as well locally at S.S. Peter & Paul Lutheran Church of Houghton, as elder, trustee and chairman of the congregations. He was a member of Kiwanis Club of Ludington and the Copper Country, a bell ringer for Salvation Army and often exercised at the Keweenaw Memorial Fitness Center and Portage Fitness Center. Mr. Dewald is survived by his brother Robert (Inga) Dewald of Boston, MA, his eldest son Dale (Dr. Marilynn) Dewald and grandchildren Alexander and Suzanne of Franklin Twp, and younger son D. Scott (Rosemarie) Dewald of Dallas, TX, and numerous nieces, nephews and cousins. In lieu of other expressions of sympathy the family suggests memorials be given to the Dorcas Society of SS. Peter & Paul Lutheran Church of Houghton, The American Cancer Society or the Kiwanis International Foundation. Funeral services for Carl will be held 11 am Wednesday February 24, 2016, at S.S. Peter & Paul Lutheran Church of Houghton with Rev. Aaron Gehrke to officiate. Spring burial will be in the Lakeside Cemetery of Hancock. Friends may call on Tuesday February 23, 2016, from 6 to 8 pm at the Memorial Chapel Funeral Home of Hancock, and on Wednesday from 9:30am until 10:30am at S.S. Peter & Paul Lutheran Church of Houghton. To view Carls obituary or to send condolences to the family please visit www.memorialchapel.net. The Memorial Chapel & Plowe Funeral Homes are assisting the family with the arrangements. To send flowers to the family of Carl Dewald, please visit Tribute Store
To order memorial trees or send flowers to the family in memory of Carl Dewald, please visit our flower store.