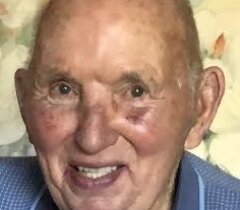 Superior Location
Charles “Babe” Little, 93, of Superior Road in Houghton, passed away on Friday, May 27, 2022, at UP Health Systems – Portage Hospital following a short illness.

He was born on May 8, 1929, in Dodgeville, MI, a son of the late Charles and Pearl (Hearn) Little. Charles was a graduate of the Houghton High School with the class of 1949.

Mr. Little was a veteran having served in the Korean War from 1951 to 1953 as a Corporal spending six months in Germany. He was a member of Alfred Erickson Post #186 American Legion of Hancock.

On June 6, 1953, he was united in marriage to Dolores Trolin at the St. Matthews Evangelical Church in Hancock.

For a short time they lived in the Detroit area before returning to make a home in the Copper Country. Even though Babe was always a farmer at heart he worked as a carpenter.

Charles is survived by: his wife of almost 69 years: Dolores “Dee” Little

Military Honors conducted by the Copper County Veterans Association and the Alfred Erickson Post #186 American Legion of Hancock for Charles will be held 1:00 pm Thursday June 2, 2022, at the Forest Hill Cemetery of Houghton.

In lieu of other expressions of sympathy the family suggests that memorial Contributions be given to Alfred Erickson Post #186 American Legion of Hancock in memory of Charles “Babe” Little.

To view Charles's obituary or to send condolences to the family please visit www.memorialchapel.net.

The Memorial Chapel Funeral & Cremation Services Hancock Chapel is assisting the family with the arrangements.
To order memorial trees or send flowers to the family in memory of Charles Little, please visit our flower store.