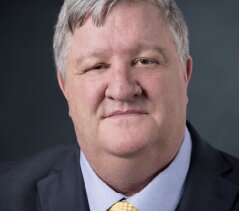 HoughtonDaniel Patrick Bennett, devoted husband, and father of six, passed away Wednesday, September 29, 2021, at the age of 59. His decade-long battle with multiple cancers ended in a draw.Dan was born on October 25, 1961, in Goose Bay Labrador Air Force Base, Newfoundland, Canada to Lt. Col. Vincent Byron and Lucile Bennett. Dan traveled the world with his family before settling in Vermont for several years. After graduating from high school, he joined the Marines and traveled the world again. He was a police officer in the Chicago suburbs of Vernon Hills and the Deputy Chief at the College of Southern Nevada before accepting the Chief of Police position at Michigan Tech in 2008. He was guided by his commitment to serving and protecting the community.A life-long learner, Dan completed his Educational Doctorate from Edgewood College, Wisconsin in January of 2021 with a dissertation focused on emergency management decisions in higher education. Dan also held a masters in public administration from the University of Nevada, Las Vegas, and a bachelors degree from Nevada State College.Dan loved portrait and landscape photography, spending hours editing images to create different effects. He was a talented singer and guitar player. In the house or in the car, he would belt out Broadway tunes, American standards, and Lizzo songs without hesitation. He spent some time as commercial photographer and as a stand-up comedian in his younger years. He encouraged his children to nurture their own artistic talents. Dan was preceded in death by his loving parents, Vincent and Lucile, and his cousin, Charlie Reynolds.He is survived by his favorite wife Trish, His six children: Richard, Jacob, Joshua, Edward, Michael, and Nathan. His four older siblings: Vincent, Michael, Maria, and Richard. Extensive extended family and his always faithful dogs, Tina and Crystal.A Mass of Christian burial for Dan will be held 11am, Friday, October 15, 2021, at St. Ignatius Loyola Catholic Church in Houghton with Rev. Fr. John Martignon to officiate. Burial will be held in the Vermont Veterans Memorial Cemetery in Randolph Center, Vermont in the Spring of 2022. Visitation for Dan will be held from 10:00am until the time of mass at the church.To view Dans obituary or to send condolences to the family, please visit www.memorialchapel.net.The Memorial Chapel Funeral Home of Hancock is assisting the family with the arrangements.
To order memorial trees or send flowers to the family in memory of Daniel Bennett, please visit our flower store.