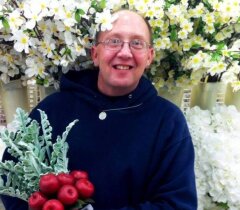 Gwinn
Daniel W. Juntunen, 56, a resident of Gwinn and former Houghton Canal resident passed away at his home in Gwinn.

He was born on August 7, 1966, in Hancock, MI, a son of Donald Juntunen and the late Elaine (Ylitalo) Juntunen. Dan was raised on the Houghton Canal and was a graduate of the Houghton High School. He then attended Northern Michigan University where he received a degree in Social Work.

Mr. Juntunen began a career in Social work with the Great Lakes Recovery Center in Marquette. He then moved to Petosky and worked for the Community Mental Health at the Petosky Club and also was the Outpatient Services Coordinator at Harbor Hall in Petosky. He then returned to the Copper Country and worked at the Phoenix House in Calumet before moving to make his home in Gwinn.

Dan was united in marriage to the former Michele Smith the couple had resided in Marquette and Petosky while they raised their son.

Dan was a talented artist. He began drawing and painting at an early age. He was always into Arts & Crafts and made gifts for people, even without an occasion. He loved the outdoors, especially working in his garden. He was a thoughtful and giving person who was willing to lend a hand to any stranger.

Preceding him in death were his mother Elaine, his sister Betty Perla along with his grandparents.

A memorial service for Dan will be held 11:00 am Monday, September 26, 2022, at the Gloria Dei Lutheran Church of Hancock with Revs. Brahm Semmler Smith and Kelly Ylitalo to officiate. Burial will be in the Oskar Cemetery at a later time.

Friends may call on Monday, September 26, 2022, from 10 am until time of services at the Gloria Dei Lutheran Church of Hancock.

To view Dan’s obituary or to send condolences to the family please visit www.memorilachapel.net.

The Memorial Chapel Funeral & Cremation Service - Hancock Chapel is assisting the family with the arrangements.
To order memorial trees or send flowers to the family in memory of Daniel Juntunen, please visit our flower store.