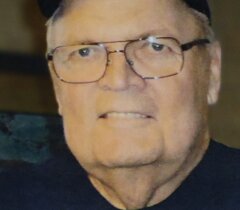 Houghton
David W. Riutta, 73, a resident of Houghton, passed away at his home Tuesday, February 15, 2022, following a lengthy illness.
He was born on August 12, 1948, in Hancock a son of the late William and Rachel (Koistila) Riutta. Dave was raised in Isle Royal Location and was a graduate of the Houghton High School with the class of 1966.
Mr. Riutta was a veteran having served with the United States Army during the Viet Nam War being stationed in Okinawa.
On June 12, 1971, he was united in marriage to the former Joilyn Podnar. The couple resided in Isle Royal Location and raised their three children.
David had worked for Northern Hardwoods for a short time be working as a mason for various construction companies such as Mattila Contracting and Herman Gundlach Contracting. He then began a career working for the Portage Township Schools as Custodian/Bus Driver retiring in 2003 after 30 years of service to the district.
Mr. Riutta was a member of Gloria Dei Lutheran Church of Hancock. He enjoyed hunting, fishing, spending time visiting with family and friends and attending his children’s and grandchildren’s events.
Preceding him in death were his father William Riutta and his mother and step-father: Rachel and Hugo Laiminga.
Surviving are: His wife: Joilyn Riutta of Isle Royal Location; His children: Scott Riutta of Hurontown, Amy Riutta of Negaunee, & Melissa (Jeremy) Gagnon of Sault St. Marie, MI; His grandchildren: Tyler (Monica) Riutta, Nicholas St. Amour, Cameron Gagnon and Khloe Gagnon; His great-grandchild: Oakland Riutta; Several cousins
A memorial service for Dave will be held 2:00 pm Monday, February 21, 2022, at the Memorial Chapel Funeral Home of Hancock with Rev. Brahm Semmler Smith to officiate. Spring burial will be in the Forest Hill Cemetery of Houghton where Military Honors will be held.
Friends may call on Monday, February 21, 2022, at the Memorial Chapel Funeral Home of Hancock from 12 noon until time of services.
To view David’s obituary or to send condolences to the family please visit www.memorialchapel.net.
The Memorial Chapel Funeral & Cremation Service of Hancock is assisting the family with the arrangements.
To order memorial trees or send flowers to the family in memory of David Riutta, please visit our flower store.