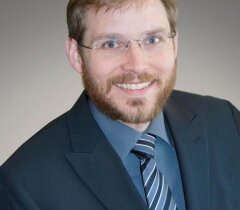 Obituary of David M. Szyszkoski Duluth, MN David M. Szyszkoski, 35, a resident of Duluth and former Chassell resident passed away Tuesday July 26, 2016, in Duluth from injuries received in an accident. He was born on August 4, 1980, in Hancock a son of Stephan and Judy (Tervo) Szyszkoski. David was a graduate of the Chassell High School with the class of 1998. He then attended Michigan Technological University and graduated in 2004 with a degree in Land Surveying. Following graduation, he moved to Brookfield, WI to work for Losik Engineering and since 2008 has made his home in Duluth, Minnesota where he was working for TKDA as a professional surveyor. He was a licensed surveyor in Minnesota, North Dakota, Wisconsin, and Michigan. In 2007, he was united in marriage to the former Kirsten Schroeder. David was a member of the First Apostolic Lutheran Church of Virginia, MN and Houghton MI. David was always full of energy and was a very talented person. He enjoyed working on a variety of building projects around his home, raising livestock and working on old cars. He also enjoyed helping solve problems and mentoring others at work. He was active with the Minnesota Society of Professional Surveyors and the Wisconsin Society of Land Surveyors. David loved children and never tired of their company. Preceding him in death were his paternal grandmother Margaret Szyszkoski and his mother-in-law, Judy Schroeder. Surviving are: His wife: Kirsten Szyszkoski of Duluth, MN His parents: Stephan and Judy Szyszkoski of Chassell His sister: Eva Szyszkoski of Abbeville, LA His brothers: Kurt Szyszkoski of Marquette, MI Karl (Stephanie) Szyszkoski of Denver, CO His grandparents: Kenneth & Esther Tervo of Chassell Stefan Szyszkowski of West Palm Beach, FL His father-in-law: Don Schroeder of Sullivan, WI His brother-in-law: Travis (Laura) Schroeder of Eagle, WI His niece and nephew: Bridger and Solace Schroeder Special cousins: Arvid, Jiri and Miika Saari Numerous aunts, uncles, cousins, and many brothers and sisters in faith. Funeral services for David will be held 11 am Monday August 1, 2016, at the First Apostolic Lutheran Church of Houghton with David Taivalkoski to officiate. Burial will be in the Chassell Cemetery. Friends may call on Sunday July 31, 2016, from 2 to 7 pm at the First Apostolic Lutheran Church of Houghton and on Monday from 10 am until time of services at the church. To view Davids obituary or to send condolences to the family please visit www.memorialchapel.net. A time to celebrate Davids life will also be held 4 pm Thursday August 4, 2016, at the Szyszkoski home in Duluth, MN. The Memorial Chapel & Plowe Funeral Home of Chassell has been assisting the family with the arrangements. To send flowers to the family of David Szyszkoski, please visit Tribute Store
To order memorial trees or send flowers to the family in memory of David Szyszkoski, please visit our flower store.