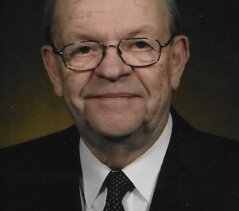 Hancock David C. Wiitanen, 87, a well-known area personality passed away Monday, January 24, 2022, at the Green Tree of Hubbell where he had been a patient. He was born on June 28, 1934, in Hancock, MI, a son of the late Axel and Saima (Saari) Wiitanen. Dave was raised in Hancock and was a graduate of the Hancock High School with the class of 1952.On November 7, 1953, he was united in marriage to the former Helen Schaaf the couple made their home in Hancock where they raised their two daughters. They moved to make their home in Dollar Bay on May 12, 2004, Helen Preceded David in Death. On January 1, 2005, he was united in marriage to the former Gladys Kemppa-Murtonen. The couple made their home in Hancock and on January 12, 2017, Gladys preceded David in death. Mr. Wiitanen had been employed with Thornton Construction Company as a grader operator until accepting a position with Michigan Technological University working his way up to be the supervisor of the grounds at his retirement. Mr. Wiitanen has always been an active person. Daves family, his church, his community and Hockey were his true passions in life. He loved his family. Dave was a very active member of Gloria Dei Lutheran Church in Hancock, chairing the property committee for many years and served on the church council and finance committee for many years along with helping with many projects. He was very active in many community projects and areas serving on the Hancock City Council and also as Mayor of the City and committees over the years such as the Houghton Arena which he helped build and develop over the years and served as chair of the Houghton County Arena Board for many years. Hockey was one of Daves true passions and was a very active member of the Copper Country Junior Hockey Association for many years coaching, and servicing in various committee positions. He then became active with MAHA (Michigan Amateur Hockey Association) serving in various positions over the years. He then was very active the USA Hockey and was very proud to have received the William Thayer Tutt award a lifetime achievement award for his many years of service and work to the sport he so loved. Preceding him in death were his parents, his first wife Helen, his second wife Gladys, his daughter Christine Garza, his siblings, Herbert, Ronald, Paul, Richard, and Robert. Surviving are: His Daughter: Donna (John) Kuru-Watson of Hancock; His grandchildren: David (Carrie Racine) Kuru of Stanton Township, Michael Kuru of Houghton, Matthew (Krystyn Mazurowski) Kuru of Hancock, David (Raffi) Garza of Rockwood, MI, & Sara Garza of Illinois; His 5 great-grandchildren; His step-children: Greg (Christine) Murtonen of Katy, TX, Dave (Diane) Murtonen of Ypsilanti, MI, Gwen (David) Brailsford of Toledo, OH, Jonelle (Patrick) Conway of Hartland; 8 step-grandchildren and 3 step-great-grandchildren; His sister: Barbara Holmes of Kent, WA; Numerous nieces, nephews and cousins A funeral service for David will be held 1:00pm Tuesday, February 1, 2022, at the Gloria Dei Lutheran Church of Hancock with Rev. Brahmn Semmler-Smith to officiate. Friends may call on Tuesday, February 1, 2022, at the Gloria Dei Lutheran Church of Hancock from 11 am until time of services. Spring burial will be in the Lakeside Cemetery of Hancock. To view David's obituary or to send condolences to the family please visit www.memorialchapel.net. The Memorial Chapel Funeral & Cremation Service of Hancock has been assisting the family with the arrangements.Please click the following link to view David's Funeral Service:https://youtu.be/mUqjKggN_yQ
To order memorial trees or send flowers to the family in memory of David Wiitanen, please visit our flower store.