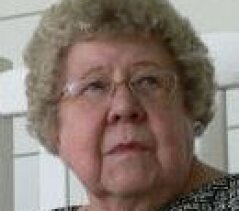 Obituary of Dolores M. Peltoniemi Dollar Bay Dolores Peltoniemi, 83, a resident of Dollar Bay, passed away Monday evening October 5, 2015, at UP- Health Marquette Hospital following a short illness. She was born on May 30, 1932, in Rockland, MI, a daughter of the late Julius and Edna (Aho) Heiskanen. Dolores was raised on the family farm in Wood Spur and was a graduate of the Rockland High School with the class of 1950. She then moved to the Detroit area where she attended the Detroit Business School. Dolores had then worked for the National Bank of Detroit and Excello Corporation. On February 9, 1952, she was united in marriage to Roy Peltoniemi. The couple had resided in Alexandria, West Virginia and Detroit before returning to the Upper Peninsula to make their home in Dollar Bay in the early 1960s. Doloress life was circled around caring for her family and home. Hobbies included sewing and knitting. Preceding her in death were her husband, her parents, her sister Viola Walitalo and her brother Toivo Heiskanen. Surviving are: Her daughters: Sharon (Steve) Johnson of Baraga Cynthia ( Ken) Flood of Dollar Bay Her grandsons: Steve (Marissa) Johnson Jr., Benjamin Johnson and Brian Johnson Her great grandson: Ryker Johnson Several nieces, nephews, and cousins Funeral services for Dolores will be held 3 pm Friday October 9, 2015, at the Memorial Chapel Funeral Home of Hancock with Pastor Thomas Schierkolk to officiate. Burial will be in the Lakeside Cemetery of Hancock. Friends may call on Friday October 9, 2015, from 2 PM until time of services at the Memorial Chapel Funeral Home of Hancock. To view Doloress obituary or to send condolences to the family please visit www.memorialchapel.net. To send flowers to the family of Dolores Peltoniemi, please visit Tribute Store
To order memorial trees or send flowers to the family in memory of Dolores Peltoniemi, please visit our flower store.