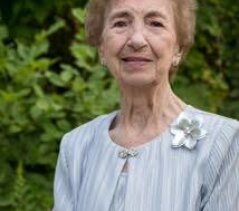 Obituary of Doris Lorraine Swetich Houghton Doris L. Swetich 92, a resident of the Heritage Manor Apartments in Houghton and former Dodgeville resident passed away Sunday afternoon December 4, 2016, at the Omega House in Houghton following a short illness. She was born on August 10, 1924, in Dodgeville, a daughter of the late Frank and Ida (Bruneau) Duzel. As a child, she attended the Isle Royal and Houghton Schools. In 1942, she was united in marriage to Roland Austin and he preceded her in death due to injures received in battle during World War II. In 1946, she was united in marriage to Joseph Swetich. The couple raised three children together while residing in Dodgeville. In 1997, Joe preceded Doris in death. Doris was employed locally with Newberrys Dime Store, Walmart, Parkside Bakery and the Hearth Bakery. Mrs. Swetich was a member of St. Ignatius Loyola Catholic Church of Houghton and FOE Aerie #1122 of South Range. She enjoyed spending time with her family, crocheting, dancing and trips to the casino. Preceding her in death were her husbands, her parents, her sisters; Bernice Spehar, Grace Mattson, Mae Franz and her brother Delbert Duzek. Surviving are: Her children: Rolanda (Joe) Berg of Escanaba, MI Joseph Swetich of Alston Jerome (Doreen) Swetich of Red Ridge 8 grandchildren and 6 great grandchildren Her brother: Jim (Audrey) Duzek of Lansing, MI and Florida Her sisters: Joy (Al) Thaler of Heber, AZ Fay (Roy) Hoyer of Suring, WI and Arizona Her sisters-in-law: Arleen Duzek of Eaton Rapids, MI Fran Swetish of Ontonagon Several nieces, nephews and cousins. Her special friend: Hazel Tepsa of Houghton A Mass of Christian Burial for Doris will be held 11 am Friday December 9, 2016, at St. Ignatius Loyola Catholic Church of Houghton with Fr. John Martignon to officiate. Spring burial will be in the Forest Hill Cemetery. Friends may call on Friday December 9, from 9:45 – 10:45 am at St. Ignatius Loyola Catholic Church. To view Doriss obituary or to send condolences to the family please visit www.plowefuneralhome.com The Memorial Chapel & Plowe Funeral Homes of Houghton is assisting the family with the arrangements. To send flowers to the family of Doris Swetich , please visit Tribute Store
To order memorial trees or send flowers to the family in memory of Doris Swetich, please visit our flower store.