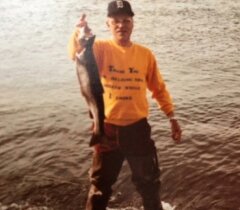 Obituary of Edward C. Kokkila Hancock Edward C. Kokkila, 83, a resident of Hancock, passed away Thursday March 8, 2018, at his home following a lengthy illness. He was born on June 8, 1934, in Highland Park, MI, a son of the late Edward A. and Estelle (Heikkinen) Kokkila. Ed was raised in Detroit and was a graduate of the Cooley High School. He then attended Soumi College. Mr. Kokkila was a veteran having served with the United States Army. On June 13, 1959, he was united in marriage to the former Kathryn Pulkki. The Couple had resided in the Detroit area until moving to make their home in Hancock since 1962. Edward was a member of the First Apostolic Lutheran Faith. He had worked for the State of Michigan as a Social Worker first in Lower Michigan and then retiring from the Local office, where he helped many people obtain an education and go on to live full lives. He was a wonderful husband, father and a grandfather that adored his grandchildren. He enjoyed fishing in his spare time and was the pitcher for the Bancroft Dairy baseball team for 20 years. Surviving are: His wife: Kathryn Kokkila of Hancock His children: Kathryn (William) Jarvi of Hebron, KY Edward A. Kokkila of Coon Rapids, MN Peter (Margie) Kokkila of Minneapolis, MN Andrea (Kevin Lassila) Ruotsala of Atlantic Mine His grandchildren: Kathryn, Benjamin, Andrew, Michael, Stephanie, Lauren, Erika and Stacy His great grandchildren: Rudy, Luuka, Eliza, Leevi and Lenni Also surviving are one niece, two nephews and several cousins Funeral Services for Edward will be held 11 am Saturday March 10, 2018, at the First Apostolic Lutheran Church of Houghton with Pastor David Taivalkoski to officiate. Spring burial will be in the Lakeside Cemetery of Hancock. Friends may call on Saturday March 10, 2018, from 10 am until time of services at the First Apostolic Lutheran Church of Houghton. To view Edwards obituary or to send condolences to the family please visit www.memorialchapel.net. The Memorial Chapel & Plowe Funeral Homes of Hancock are assisting the family with the arrangements. To send flowers to the family of Edward Kokkila, please visit Tribute Store
To order memorial trees or send flowers to the family in memory of Edward Kokkila, please visit our flower store.