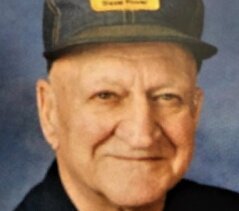 Baltic
Edward Joseph Parolini, 96, of Baltic, Michigan died on March 6, 2022, at the Canal View skilled nursing facility, where he had been a resident patient since September 2021. Ed was born on June 15, 1925, in the Suo District of Houghton County, Michigan, to the late James and Celina (Chaput) Parolini. He was raised at Onkalo’s Corner and attended the Isle Royale School on Superior Road.

He was united in marriage to Helen Violet Marttila on July 23, 1949, in Detroit. In 1957 Ed and Helen moved from Detroit to Baltic, where they raised their family and remained for the rest of their lives.

During WWII, Ed served in the U.S. Navy as a Seaman 1st Class in Hawaii. Following his honorable discharge, he worked as a heavy equipment operator and was a proud member of Operators Union 324 for over 60 years.

He was a devoted life-long member of the Holy Family Catholic Church in South Range.

Ed loved tinkering at “the farm” where he and his brother Jim spent their retirements doing pretty much what they did for their entire working lives, operating and repairing heavy equipment. Over the years, one five-yard dump truckload at a time, the brothers hauled a thousand yards and more of sand from the farm to those in the area who wanted good clean Parolini sand. Ed spent hours enjoying coffee with friends at Tina’s Restaurant, The South Range Village Pub, and for 30 years, Fred's Repair Shop. He enjoyed watching the Detroit Tigers and old TV programs, especially westerns, and also doing jigsaw puzzles.

Along with his wife and parents, Ed was preceded in death by his brothers and their wives: James and Margie, Gerald and Ruth, and Lawrence and Esther; an infant brother Gabriel; and by his dear friend Gloria Stone.

As we close out this chapter in our lives, we his children are eternally grateful to have been blessed with a father such as he, and we would like to share words of his that we as youngsters heard innumerable times: "Turn out the lights. Electricity costs money."

A Mass of Christina Burial for Ed will be held 11:00 am Friday April 22, 2022, at the Holy Family Catholic Church of South Range with Fr. John Martignon to officiate. Burial will be in the Mt. View Cemetery of South Range at a later date.

To view Ed's obituary or to send condolences to the family please visit www.memorialchapel.net.

The Memorial Chapel Funeral & Cremation Service Mountain View Chapel of South Range is assisting the family with the arrangements.
To order memorial trees or send flowers to the family in memory of Edward Parolini Sr., please visit our flower store.