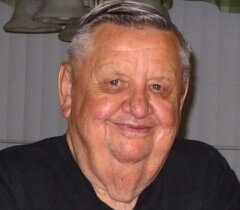 Obituary of Edward E. Saari Cross City, FL Edward E. Saari, 82, a resident of Cross City, FL and former Hancock resident passed away May 17, 2017 in Cross City. He was born on June 3, 1934, in Hancock son of the late Edward and Hilja "Jill" (Kotila) Saari. Ed was a graduate of the Hancock High School with the class of 1952 and attended Michigan Technological University, Soumi College and Northern Michigan University. He also was a veteran having served with the United States Air Force. Ed retired from the State of Michigan Department of Social Services in 1988 while residing in L'Anse. During his retirement, he wintered in Florida and summered in Hancock before making his home full time in Cross City, FL. Mr. Saari was a member of Alfred Erickson Post #186 American Legion of Hancock. He was an avid sports fan and a tried and true Detroit Lions and Tigers fan. He enjoyed traveling, watching sports, playing penny slots, and spending time with his family and friends. Mr. Saari is survived by his children, Edward Saari of Baraga, Joey Saari of Cross City, FL, Joy (Joe) Young of Omaha, NE, and Betsy (Larry) Riehl of Ocala, FL, grandchildren Scott Biekkola of Omaha, NE, Megan (Todd) Saari of Portland, OR, and Amber Saari of Houghton, 2 great grandsons Elias Voelker and Michael O'Connell, and his sister Joy (Marv) Lilley of Woodbury, MN. Numerous cousins as well as his niece, Heidi, also survive. Preceding him in death were his parents, his nephew Scott, and his daughter-in-law Lynn. A memorial service for Edward will be held 1:30 Saturday August 12, 2017, at the Memorial Chapel Funeral home of Hancock with Rev. Jimalee Jones to officiate. Military Honors will be conducted by the Copper Country veterans Association. Friends may call on Saturday August 12, 2017, from 12:30 pm until time of services at the Memorial Chapel Funeral Home of Hancock. To view Edward's obituary or to send condolences to the family please visit www.memorialchapel.net. The Memorial Chapel & Plowe Funeral Home of Hancock has been assisting the family with the arrangements.Service Information To send flowers to the family of Edward Saari, please visit Tribute Store
To order memorial trees or send flowers to the family in memory of Edward Saari, please visit our flower store.