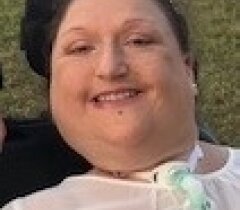 HANCOCK — Elisha Ann Kitchen, 37, a lifelong resident of Hancock, passed away on September 8, 2020, in Hancock, of complications from an accident she suffered as a child. She was born on December 8, 1982, in Hancock, the third child of Diane (Ristila) Kitchen and the late Dennis Kitchen. On February 14, 1989, Elisha was struck by a car after exiting her school bus in front of her home on Hancock Street. Since then, she had been a quadriplegic on a ventilator and bravely fought off several health complications from her accident until her death on Tuesday. Initially thought to live only a few years, Elisha made the best of her condition and survived for 31 more years. She graduated from Hancock Central High School in 2002. Her intellect and wit still intact, she spent her life dictating baking recipes to her caregivers, organizing parties and weddings, singing along to her favorite songs without humility and spending each waking moment being the most generous and caring person in the room. Her positivity, particularly in regards to her own situation, was the primary factor for exceeding her life expectancy. Elishas legal case,Kitchen v. State Farm, is considered by legal scholars to be a landmark lawsuit for no-fault auto insurance, which allowed her to receive proper medical care for the duration of her lifetime and that of others. In 1998, the State of Michigan passed Elishas Law, which increased penalties for going around a stopped school bus. In 1992, Kevin Costner called Elisha after his agent read an article about her admiration for the actor. They spoke for over an hour. Also that year, she met the Detroit Pistons. In 2001, Elisha was granted a Make-A-Wish, which she used (wisely) to meet the Backstreet Boys. She would go on to meet them two more times. Elisha regularly traveled to Walt Disney World, her happy place. Proceeding her in death were her father, Dennis, and nephew, Michael Kitchen, Jr. Surviving are her mother, Diane Ristila Kitchen of Hancock; brothers, Chris Kitchen and wife, Martha, of Lake Anne; Robert and wife, Tara, of Okemos; Tony Kitchen of Chicago; Michael and wife, Jenna, of Chicago; nieces and nephews, Katie, Aaron, Kyra, and Ford; her grandmother, Joan Otto; Aunts Theresa (Kenny) Haralson of Lake Linden; Marilyn (Charlie) Gustafson of Hancock; and numerous cousins, friends, and dedicated nurses and aides. Elishas family would like to thank Dr. James Black and Dr. Wade Liston for the care they have given to Elisha over the years and who Elisha would only entrust her life and care to. A Celebration of Life and funeral services will be held at Saints Peter & Paul Lutheran Church, at 2 pm on Saturday, September 25, 2021. All attending Elishas are asked to please where a mask. For those not able to attend services will be live streamed at www.copperluth.org/Elisha To view Elishas obituary or to send condolences to the family, please visitmemorialchapel.net The Memorial Chapel & Plowe Funeral Homes of Hancock have been assisting the family with the arrangements.
To order memorial trees or send flowers to the family in memory of Elisha Kitchen, please visit our flower store.