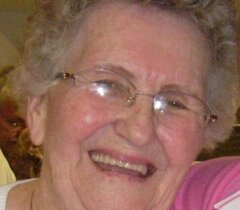 Obituary of Elsie Luoma Redridge Elsie Luoma, 87, a former resident of Redridge and Dollar Bay, passed away Sunday morning June 19, 2016, at the Medora House of Portage Pointe in Hancock where she had been a resident patient for the past three years. She was born on March 27, 1929, in Hancock, a daughter of the late Fred and Mary (Bryson) Eakin. As a child, she attended the Heinola School. Most of her life she resided in Houghton, Liminga, Redridge and for a short time in Dollar Bay. On November 22, 1947, she was united in marriage to Aaron Luoma. The couple raised five children together. On April 21, 1989, Aaron preceded her in death. Mrs. Luoma had worked as a cook for the EB Holman and Stanton Township Schools, retiring in 1993. Elsie was a member of the South Range Apostolic Lutheran Church. She enjoyed cooking, knitting, crocheting, reading the Bible, listening to music and spending time with her grandchildren. She also volunteered with Little Brothers Friends of the Elderly for many years. Preceding her in death were her husband, her brother, William, and her parents. Surviving are:Her children: June (Rev. Roger) Jenkins of South Range, MI Leonard (Kathryn) Luoma of Toivola, MI Fred (Bev) Luoma of South Range, MI, Jacqueline (James Sr.) Brandt of Redridge, MI Kenneth (Jessica) Luoma of Cambridge, MN 16 grandchildren, 28 great grandchildren and 2 great great grandchildren Her brothers: John (Vivian) Eakin of Farmington, MI Fred (Kathryn) Eakin of Montrose, MI Harold (Fran) Eakin of Walled Lake, MI George (June) Eakin of Hurontown Dave (Lynn) Eakin of Hancock Her sisters: Mabel Wakeham of Houghton, MI Dorothy Ylitalo of the Houghton County Medical Care Facility Lillie Wiitala of the Houghton, MI Vera Smith of Houghton, MI Loretta (James) Laplander of Woodside Location, Dollar Bay, MI Numerous nieces and nephews and friends. Funeral Services for Elsie will be held 11 am Thursday June 23, 2016, at the South Range Apostolic Lutheran Church with Rev. Arvo Onermaa to officiate. Burial will be in the Liminga Cemetery. Friends may call on Wednesday June 22, 2016, from 5 to 8 pm at the South Range Apostolic Lutheran Church and on Thursday June 23, from 10 am until time of services at the Church. To view Elsies obituary or to send condolences to the family please visit www.memorialchapel.net. The Memorial Chapel & Plowe Funeral Homes of Hancock have been assisting the family with the arrangements. To send flowers to the family of Elsie Luoma, please visit Tribute Store
To order memorial trees or send flowers to the family in memory of Elsie Luoma, please visit our flower store.