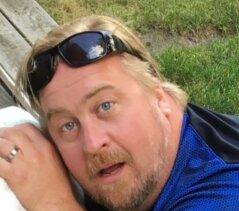 De Pere, WI Erik Wayne Nelson, 49, of De Pere, Wisconsin, unexpectedly passed away Sunday, November 8, 2020 in Green Bay. On August 10, 1971, Erik was born in Detroit, Michigan, to Karen (Hedberg) Nelson and the late Wayne Nelson. Erik was raised in Redford, Michigan, and graduated with the class of 1989 at Redford Union High School. Following his graduation, he completed his certification in Diesel Automotive Technology from the University of Northern Ohio (UNOH) which led him to a long career with FRAZA Forklifts (formerly G&B Sales and Service) and most recently, Wisconsin Lift Truck. Erik was united in marriage to his high school sweetheart Kristie Laurendine on August 27, 1994. Together, they resided in Garden City, MI and raised their four Sons - Kyle, Kevin, Brendan, and Casey. In 2016, the family moved to Michigan's Upper Peninsula where they spent a brief two-years in Allouez, MI and since 2018, have made their home in De Pere, Wisconsin. A Christian man of irrefutable strength and impeccable character, Erik was a proud member of the Masonic Brotherhood with the Garden City Lodge #587 Free & Accepted Masons, where he held several officer positions. He also valued philanthropy and service by giving and volunteering annually to several organizations such as Shriner's Hospital, JDRF, Tunnels for Towers, and more. All who had the pleasure of knowing Erik knew of his deep passion for music and his ventures in homebrewing, especially his Brown Ale for which he was most proud. His creative spirit and talent was evident from a young age as he was a talented artist, song-writer, and singer. Surviving are: His wife: Kristie L. Nelson of De Pere, WI His children: Kyle W. Nelson of De Pere, WI Kevin M. Nelson of Grand Rapids, MI Brendan M. Laurendine of De Pere, WI Casey J. Nelson of De Pere, WI His mother: Karen E. Nelson of Hancock, MI His sister: Amy H. Nelson of Hancock, MI As well as numerous aunts, uncles, and cousins. A funeral service for Erik will be held Saturday, November 21, 2020 at Noon at the Memorial Chapel Funeral home of Hancock with Rev. Peter Vorhes to officiate. Spring burial will be in the Lakeside Cemetery of Hancock. Friends may visit from 10:00 AM to 12:00 PM at the Memorial Chapel Funeral Home of Hancock. To view Eriks obituary or to send condolences to the family, please visit www.memorialchapel.net.
To order memorial trees or send flowers to the family in memory of Erik Nelson, please visit our flower store.