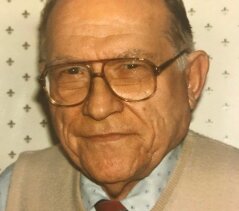 Obituary of Ernest Raymond Griff Chassell Ernest R. Griff, 91, passed away at home on May 23, 2018. Ernie was born on October 14, 1926, on a farm near Antigo, Wisconsin, son of Joseph and Bessie (Pruha) Griff. After graduating from Antigo High School in 1945 Ernies family moved to Wausau, Wisconsin. In Wausau Ernie worked for a trucking firm as a means of earning money for college expenses. He earned a Bachelor of Science degree in 1950 from the University of Wisconsin-Stevens Point then taught mathematics at Phillips High School, Phillips, Wisconsin for two years. In 1952 Ernie enrolled at the University of Wisconsin-Madison and obtained his Master of Science degree in math-education in 1955. While enrolled at the University he taught math at the University Laboratory School and, for a short time served as president of the Neuman Club on campus. From 1953 to 1956 he taught mathematics at Lincoln High School in Wisconsin Rapids. He is a life member of the National Council of Teachers of Mathematics. Ernie was lured to Houghton to teach math at Michigan Technological University in 1956. He was promoted to the academic rank of assistant professor of mathematics in 1958. In 1960, he accepted the open position as admissions counselor at Michigan Tech since the position of director of admission suddenly became vacant. Ernie was named the director of admissions in 1980. In 1983 Ernie was declared the recipient of MTUs Clair M. Donovan Outstanding Service Award. He retired from MTU in 1986. While as admissions officer, Ernie was one of twenty persons from throughout the United States selected by the National Association for Foreign Student Affairs (NAFSA) as a participant in a six-week seminar in India in 1965. In 1984 he was one of sixteen persons selected from throughout the nation by the American Association of Collegiate Registrars and Admissions Officers (AACRAO) to participate in a two-week workshop in the Arab Gulf States. Ernie was very active in his professional organizations. He served as chairman of the International Student Research Committee of AACRAO in 1983-84, served as a panelist at several annual meetings of AACRAO and NAFSA, and contributed articles for their publications. He authored the AACRAO monograph Education in the Lebanon. In two week stretches each year he traveled to Washington DC to work as a credentials analyst on a special contract of AACRAO and the Agency of International Development (AID) with the goal of placing students from Third World Countries into universities in the United States. He also was active in professional meetings at the state level. He was a past president and honorary life member of the Michigan Association of Collegiate Registrars and Admissions Officers (MACRAO). At the local level, Ernie was a long-time member and president of the Portage Lake Toastmasters Club and served as the Area Governor. He was a member of the board of directors of the Copper Country United Way, serving as its president in 1975-76. He was a Life Member of the Knights of Columbus, once serving as Grand Knight of Hancock Council 692 and as Faithful Navigator of Msgr. A.J Rezek Assembly, and later became a member and a Grand Knight of St. Michael the Archangel Council 13224 in Chassell. He was a member of St. Anne Catholic Church in Chassell, a member of its administrative and Finance Committee, and also served as an usher and lector. Much of Ernies efforts were focused on the programs of the Kiwanis Club of the Copper Country. He joined the club in 1961, served as its president in 1976-77, and served as a secretary from 1988 to 2010. He played a significant role in the development of the Builders Club of the Houghton Middle School, the Key Club of Houghton High School, and the Circle K Club of Michigan Technological University. In 1987-88 he served as a Lt. Governor in the Wisconsin-Upper Michigan District of Kiwanis as well as being the chairman of the District Achievement Committee the following three years. In recognition for his leadership roles, the local club declared him a Kiwanis George F. Hixon Fellow. He has been a Kiwanis Legion of Honor member since 1986. In 2000, the Chassell Lions honored Ernie as Citizen of the year. He enjoyed working with the younger generation by being a member of the Board of Governors of the Phi Kappa Tau Social Fraternity in Hancock. Ernie was preceded in death by his parents, his brother, Eugene; His sisters: Sr. Dorothy Griff and Hazel Green; his brother-in-law, Turner Richards; and sister-in-law, Cather (Day) Griff. His is survived by his sister Evelyn (Griff) Richards of Goldendale, Washington as well as by several nieces and nephews. Donations in memory of Ernie Griff may be given to St. Anne Catholic Church, Chassell, or to a charity of ones choice. A Mass of Christian Burial will be held 11:00 am Wednesday May 30, 2018, presided by Fr. Ben Hasse at St. Annes Catholic Church. Visitation will be held Tuesday May 29, 2018, from 5 to 8 pm at the Memorial Chapel Funeral Home of Chassell with a prayer service to be held at 8:15 pm. The Memorial Chapel & Plowe Funeral Homes of Chassell is in charge of arrangements. Ernies body will be laid to rest in the family burial site in the Bohemian Cemetery in Anitgo, Wisconsin. To view Ernies obituary or to send condolences please visit www.memorialchapel.net. To send flowers to the family of Ernest Griff, please visit Tribute Store
To order memorial trees or send flowers to the family in memory of Ernest Griff, please visit our flower store.