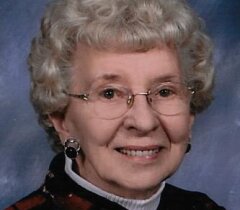 Obituary of Esther N. Strong Ripley Esther N. Strong, 93, a former resident of Ripley, passed away Friday afternoon June 26, 2015, at the Woodland Haven Wing of the Houghton County Medical Care Facility in Hancock, where she had been a resident for the past two years. She was born on February 6, 1922, in Franklin Township, a daughter of the late William A. and Ida (Maki) Niemi. At an early age, she moved with her family to Hancock. She was a graduate of Hancock Central High School, class of 1940. After seven years in Detroit, she returned to the Copper Country and resided in Ripley since 1950. On August 14, 1948, she was united in marriage to Alfred Ronald Strong; he preceded her in death on October 21, 1981. Esther had worked as a secretary while she resided in Detroit and at Michigan Technological University as an administrative secretary, retiring in 1983. Mrs. Strong was a member of Gloria Dei Lutheran Church in Hancock, where she was a member of the senior choir, former member of the Altar Guild and a former Sunday School Teacher. She was also a member of the Michigan Association of Retired School Personnel and the Hancock Public Schools Alumni Association. Esther enjoyed downhill skiing, cross-country skiing, and skating, the latter until she was 81 years old. She was an avid sports fan as well, following the Red Wings, Tigers, Pistons, Packers, Lions, and Michigan Tech Huskies (hockey and basketball). She especially enjoyed many games in which her grandchildren participated. Besides her husband, she was preceded in death by her parents, her sisters, Dorothy Bloss, Margaret Erickson, Elizabeth Niemi and Eunice Behreandt, and her brother Hugo Niemi. Surviving are her sons David (Jacalyn) Strong of Chassell, grandchildren Darcy (Monique) Strong and Abbey Strong, and Ronald (Joyce) Strong of Pinckney, grandchildren Jason Strong, Jenna Strong and Julie (Dennis) Scheibe. Numerous nieces, nephews, and cousins also survive. The family would like to express heartfelt thanks to the staff of Woodland Haven for the excellent care they provided during Esthers stay; she was always treated with love and respect, as was everyone who came to visit her. Funeral services for Esther will be held 11 am Tuesday June 30, 2015, at the Gloria Dei Lutheran Church of Hancock with Rev. DJ Rasner to officiate. Friends may call on Tuesday June 30, 2015, from 9 am until time of services at the church. In lieu of other expressions of sympathy, the family suggests that memorials be given to Gloria Dei Lutheran Church in memory of Esther Strong. To view Esthers obituary or to send condolences to the family please visit www.memorialchapel.net. The Memorial Chapel & Plowe Funeral Homes are assisting the family with arrangements. To send flowers to the family of Esther Strong, please visit Tribute Store
To order memorial trees or send flowers to the family in memory of Esther Strong (Niemi), please visit our flower store.