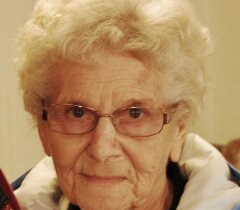 Obituary of Esther Mary Tervo Chassell Esther M. Tervo, 89, a resident of Snake River Hill, Chassell, passed away Thursday morning February 14, 2019, at the Omega House in Houghton. She was born on July 26, 1929, in Trap Rock Valley a daughter of the late Edward and Ellen (Isaacson) Angman. Esther was a 1947 graduate of the Lake Linden High School. Following school Esther worked as a Secretary for the Copper Country Dairy in Dollar Bay where she met her future husband. On August 8, 1953, she was united in marriage to Kenneth Tervo. While raising the family and maintaining the household, she also helpedKenneth operate the farm, raisingstrawberries and potatoes,andrunning a small dairy herdon Snake River Hill for over 40 years. On December 4, 2016, Ken preceded Esther in death. Mrs. Tervo was a member of the First Apostolic Lutheran Church of Houghton. Preceding her in death were her husband Ken, her grandsons, Trevor Tervo and David Szyszkoski, her parents and her sister Ellen Loukus. Surviving are: Her children: James (Christine) Tervo of Chassell Carol (Gary) Saari of Chassell Judy (Steve) Szyszkoski of Chassell Richard (Naomi) Tervo of Chassell Robert (Rebecca) Tervo of Negaunee Eighteen grandchildren & Twenty great grandchildren One brother in law,Leo Tervo of Snake River Hill Numerous nieces, nephews and cousins as well asmany other relatives and friendsin theUSA, FinlandandSweden Funeral Services for Esther will be held 11:00 a.m. Tuesday February 19, 2019, at the First Apostolic Lutheran Church of Houghton with David Taivalkoski to officiate. Spring burial will be in the Chassell Cemetery. Friends may call on Monday February 18, from 4:00until 8:00 pm at the First Apostolic Lutheran Church of Houghton and on Tuesday February 19, from 10:00 a.m. until time of services at the Church. In lieu of other expressionsof sympathy, the family suggests that memorials be given to theOmega House in Houghton, or to the Chassell School Foundationin memory of Esther Tervo. To view Esthers obituary or to send condolences to the family please visitwww.memorialchapel.net. The Memorial Chapel & Plowe Funeral Homes of Chassell have been assisting the family with the arrangements. To send flowers to the family of Esther Tervo, please visit Tribute Store
To order memorial trees or send flowers to the family in memory of Esther Tervo (Angman), please visit our flower store.