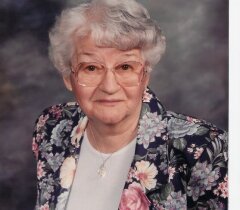 Obituary of Faith Lillian Lehto HoughtonFaith Lillian Lehto, 98, a former resident of Houghton, passed away peacefully Saturday Morning, September 17, 2016 at the Houghton County Medical Care Facility where she had been a resident for the past 5 years.Faith was born April 28, 1918 to the late August and Helen(Harma) Zerbst in Mohawk, Michigan. She then moved to the Houghton area attending the Houghton High School until the 11th grade. She was united in marriage to the late Albert Lehto in 1938. He preceded her in death in December of 1999. Faith went on to work as a homemaker and also waitressing to help pay off loans for the family home. She then went back to working as a homemaker and raising her children. Proudly, she returned to school in 1972 to obtain her high school diploma from Houghton High School. Faith was a member of St. Peter and Paul Lutheran Church where she was also a member of the Dorcas Society.Besides her husband and her parents, Faith was preceded in death by a son; John Lehto, a brother; Robert Zerbst, and a sister; Carmen Crawford.She is survived by her son;Robert(Linda) Lehto of Nashville, IN5 Grandchildren;Sarah Lehto of Vermont, Chris(Tammi) Lehto of Atlantic Mine, Eric(Shannon)Lehto of Laurium, Shane(Jamie) Lehto of Willis, MI, and Bryan Lehto of Maui, HI.7 Great-grandchildren;Trevor, Whitley, Anders, Davin, Caden, Ryan, and Harper.Faith is also survived by a daughter in law; Mary, a sister, Joyce Brule, a Brother Douglas(Helen), a special friend Margaret and numerous nieces, nephews and cousins. The family would like to thank the staff of the Houghton County Medical Care Facility for their years of love and support to Faith. Services for Faith will be held 5pm Thursday, September 22, 2016 at St. Peter & Paul Lutheran Church in Houghton with Pastor Arron Gehrke to officiate. Visitation will be Thursday at 3pm until the time of services at the church.In lieu of other expressions of sympathy, the family suggests memorials be directed to the Houghton County Medical Care Facility at 1100 W. Quincy St. Hancock, MI 49930 in Faith's memory.To view this obituary or to send condolences to the family, please visit memorialchapel.netThe Memorial Chapel & Plowe Funeral Homes of Hancock are assisting the family with the arrangements.Service Information To send flowers to the family of Faith Lehto, please visit Tribute Store
To order memorial trees or send flowers to the family in memory of Faith Lehto, please visit our flower store.