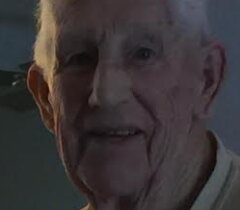 Obituary of Floyd Ellsworth Camps Houghton Floyd E. Camps, 87, a former resident of Houghton passed away Friday evening October 14, 2016, at the Houghton County Medical Care Facility in Hancock where he had been a resident since March. He was born on January 31, 1929, in Caspian, MI, a son of the late Royal and Mae (Hillman) Camps. Floyd was a graduate of the Grand Marais High School. "Mr. Camps was a veteran of the Korean War. He was inducted on November 13th, 1950 and served as an US Army Engineer attached to the US Air Force in Pusan, Korea. He built and repaired airfields and drove fuel tankers north. He was Honorably discharged on October 29, 1952." Floyd moved to Marquette and began a career working for Red Owl. It was there that he met the love of his life the former Beverly Steele. On September 4, 1954, Floyd was united in marriage to Beverly at St. Peters Cathedral in Marquette. The couple had resided in various parts of the Midwest while Floyd worked for Red Owl. In 1962, the couple moved to Houghton where they owned and operated Camps Grocery in West Houghton for 13 years. Floyd then worked for the City of Houghton Water Department, retiring in 1994. On December 19, 2010, Beverly preceded Floyd in death. Mr. Camps was a member of St. Ignatius Loyola Catholic Church of Houghton. He always enjoyed helping the community such as being a former member of the Houghton Volunteer Fire Department and was one of the founding workers of theWest Edward Ice Rink in Houghton. He loved to visit with his customers and friends his quick wit will never be forgotten. He also enjoyed bowling, golfing, camping, traveling and attending the Michigan Tech basketball games with his beloved Beverly. Surviving are: His sons: Steven (Silvia) Camps of Chassell Douglas (Juanita) Camps of Tucson, AZ David (Suzanne) Camps of Point Mills, MI Robert (Jan) Camps of Sierra Vista, AZ His grandchildren: Brandy, April, Kacie Lynn, Daryl Ann, Andrew and Kelsey. His great grandchildren: Elijah, Ryan, Brandon, Harper Grace, Liam, Avery, Hudson and Mason. His brothers: Gary (Gail) Rogers of Gladstone, MI Harvey Rogers of Anchorage, AK Numerous nieces, nephews and cousins. The son he never had, John Barnes of Escanaba. A Mass of Christian Burial for Floyd will be held 11 am Wednesday October 19, 2016, at St. Ignatius Loyola Catholic Church of Houghton with Fr. John Martignon to officiate. Burial will be in the Forest Hill Cemetery of Houghton. Friends may call on Tuesday October 18, 2016, from 5 to 8 pm at the Memorial Chapel Funeral Home of Hancock. To view Floyds obituary or to send condolences to the family please visit www.memorialchapel.net. The Memorial Chapel & Plowe Funeral Homes are assisting the family with the arrangements. To send flowers to the family of Floyd Camps, please visit Tribute Store
To order memorial trees or send flowers to the family in memory of Floyd Camps, please visit our flower store.