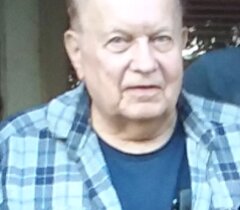 Frederick M. Zenner, 84, a resident of Hurontown, passed away Friday, November 12, 2021, at the UP Health – Portage Hospital following a short illness, with his family by his side.

He was born on May 21, 1937, in Hancock, a son of the late Ernest and Lavetta (Hartmann) Zenner. Fred was raised on 6th street in Houghton, with his 7 brothers and sisters. He was a graduate of St. Ignatius Loyola Catholic School, in Houghton with the class of 1957. He continued to be a devoted member of St. Ignatius Loyola Catholic Church all of his life.

On February 8, 1964, he was united in marriage to the former Carol Korpinen. The couple made their home in Hurontown, where they raised their family. Together in marriage for 50 years. On February 27, 2014, Carol preceded Fred in death.

Fred had worked for Herman Gundlach Contracting as a laborer for over 20 years. He helped with the building of the Michigan Technological University Campus, Victoria Dam, and many other buildings and projects during his time there. He then began a fulfilling career with Soumi College in the groundskeeping/maintenance department. This is where he put his magic to work, making the grounds look amazing until his retirement. He was also, at one time the president of the LiUNA Local 1329 Laborers Union.

Fred was a master gardener who enjoyed working with flowers and plants. He had so much knowledge that he would share with anyone who asked, about tips and tricks for gardening. He would start his own seeds in the greenhouse for the flowers and vegetable garden. He took great pride in making his yard and flower gardens look beautiful. He always had a fresh-cut lawn with his perfectly arranged flowers.

In his early years, Fred loved taking drives down to Detroit and Hazel Park with his friend Thor Juntikka, amongst others. Always riding in a nice car he would take great care of. He also loved hanging with the guys out at the hunting camp in Salmon Trout. Family days, taking the kids and all their friends out to the camp. He always enjoyed being with others, never having a dull moment. Making memories for many stories to be told throughout the years.

He also had a love for local history. He was a wealth of knowledge when it came to the history of people, landmarks, and buildings. He was one of the first people to cross the newly built Portage Lake Lift Bridge, when it opened for traffic in 1959.

Fred enjoyed going to his favorite place on earth, the family camp in Donken. He took great care of the property, it was his pride and joy. He was happy to go there to have his alone time, where he would enjoy a cigar and a drink. He also loved spending time there with his family, watching the next generation get to enjoy what he so loved. He always had a story to tell about the deep history of the camp and how it came to be, his ancestors and all their old stories. Every story he told was interesting and intriguing to hear.

Fred was very proud of his 100% German ancestry. He had bright blue eyes, and he was often complimented on them. Fred was a part of the local community, where it seemed he had friends no matter where he went. He was always stopping to talk with someone. He was quite the regular at the local coffee spots and restaurants, where he would meet with his brother, sister and friends.

Fred was the family rock, he was always there for everyone. He was an exceptional husband, dad, brother, uncle and friend. He was proud of his family. He especially enjoyed being grandpa, or better known as Papa Fred. He would be there for anything and everything, from Christmas concerts at the school, to home concerts with the kids dancing and singing for him in the living room. Making sure he had popsicles, candy, chips, and cookies for whenever they came to visit. He loved all of his grandkids dearly.

Preceding him in death were his wife, Carol, his parents, his sisters and brothers: Alice Zenner, Mary Lou Reynolds, William “Butch” Zenner, Robert Zenner, Barbara Zenner and most recently, his niece Alice Reynolds.

A Mass of Christian Burial for Fred will be held 11:00 am Thursday June 23, 2022, at St. Ignatius Loyola Catholic Church of Houghton with Fr. John Martignon to officiate. Burial will be in the Forest Hill Cemetery of Houghton.

To view Fred’s obituary or to send condolences to the family please visit www.memorialchapel.net.

The Memorial Chapel Funeral & Cremation Service of Hancock is assisting the family with the arrangements.
To order memorial trees or send flowers to the family in memory of Fred Zenner, please visit our flower store.