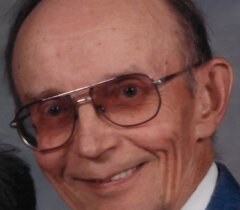 Obituary of Fritz Ahola Dollar Bay, Frederick W. (Fritz) Ahola, age 85, retired Houghton postmaster died at home on Wednesday, April 24 following a lengthy illness. He was born in Hancock on March 27th of 1934. The son of Frederick and Alice (Aula) Ahola and from the age of 19 months was raised by his maternal grandparents, Oscar and Aina Aula, on a farm in the Pilgrim area. He was a 1952 graduate of Houghton High School and following a year at Michigan Tech he joined the Air Force. On September 17th of 1955 he married Agnes DesJardin of Hubbell. Following the wedding they moved to Lincoln, Nebraska where he was stationed. Their oldest two children were born there. Following his discharge in 1958 they moved back to the farm in Pilgrim. He worked as a sand hog on the Portage Lake lift bridge and 4 years as a bookkeeper for the U.P. Oil Company. In 1964 he was appointed postmaster of Houghton; a position he held for 26 years until his retirement in October 1990. Following his retirement he spent 25 years volunteering for Little Brothers and nine and a half years delivering flowers for Kathys Country Flowers. He was preceded in death by his parents, stepfather James Peterson, infant brother Jon Philip and infant son Little Fritzie. Surviving are his wife of 63 years, Agnes, children, Vicki (Mark) Little of Tapiola, Ricky (Sandra) Ahola of Houghton, Jon (Laura) Ahola of Portage Wisconsin, Dawn (Michael) Guzak of Battle Creek, Mary (Daniel) Crane of Chassell and Sandra Allen of Coral Gables Florida, sixteen grandchildren and 15 great-grandchildren, special cousin Walleen Falstad and sister-in law Sadie DesJardin. He enjoyed deer hunting, bowling, Tiger baseball, Redwings hockey, Detroit Lions football, Detroit Pistons basketball and Houghton High School sports, especially when the grandchildren were playing. He was the past president of the Houghton High School Alumni Association, member of American Legion Post 90 of Lake Linden, member of the Michigan branch of the National Association of Postmasters. A memorial service for Fritz will be held 11 am Monday April 29, 2019, at St. Ignatius Loyola Catholic Church in Houghton with Fr. John Martignon to officiate. Burial will be at the Forest Hill Cemetery. In lieu of other expressions of sympathy, memorial contributions can be made to Little Brothers Friends of the Elderly or the Houghton High School Alumni Association. To view Fritzs obituary or to send condolences to the family please visit www.memorialchapel.net. The Memorial Chapel & Plowe Funeral Homes of Hancock are assisting the family with the arrangements. To send flowers to the family of Fritz Ahola, please visit Tribute Store
To order memorial trees or send flowers to the family in memory of Fritz Ahola, please visit our flower store.