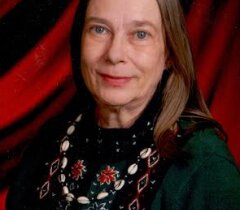 Obituary of Gail Evelyn Pouttu Gail Pouttu10­/25/­1953 to 9/­1/9­2016 Gail Evelyn Pouttu, 62, a resident of Hancock MI passed away on September 19, 2016 at Cypress Manor after a three month illness. Gail was born on October 25, 1953 in Casper, Wyoming, daughter of the late Pentti Esa Pouttu and Hilda Narhi Pouttu of Elo. The family lived in Casper from 1950 through 1966, where she attended Park elementary and Dean C. Morgan Junior High Schools. The family was transferred with her father to San Francisco, her fathers birthplace. They lived in San Leandro and later Berkeley, where her older sister Paula was enrolled in the University of Californias doctoral program. When her father Pentti contracted cancer, they returned to the family homestead in Elo, where members of the family still reside. Gail remained in Berkeley to finish High School, graduating at 17. She then attended Baraga High School for one more year, class of 1972. Although she was raised in Casper, the San Francisco Bay Area and Elo, Gail moved as an adult to Chicago where she worked as a legal administrator for the Adlai Stevenson Law Firm. She then moved to Denver where she married William Charles Habberley II of Aspen CO and had two children, Evelyn and William. After William senior had passed away she married Robert Thornton Hull, son of retired States Attorney Donald Hull of Parker Ranch CO. They had two children, Alice and Haley. She and Robert moved back to Houghton where he managed a store while she recovered from an illness. Robert passed away in 2008. Gail was known for her personal courage and warm friendships. For the past 20 years, Gail has been a resident of Hancock and ran her own cleaning service in the area. She enjoyed working summers at the concession stand at Hancock Beach and playing the violin. Gail received an Associate of Arts Degree from Suomi/Finlandia College but claimed her proudest achievements were her children. She was an active and proud member of the Ressurrection prayer shawl ministry near her home and said she had not missed a Sunday service for 20 years. Her knitted baby sweaters, caps and scarves have been gifts throughout the Midwest. She shared her home with many friends and two cherished cats. She has been quoted in magazine articles for her support of people who recover from mental illnesses, and served as a community advisor. She provided willing support to her family and friends, who will miss her. Gail Pouttu was preceded in death by two husbands, William Habberley and Robert Hull, both her Parents, Pentti Pouttu and Hilda Pouttu, and one sister, Alice (Pouttu) Karsama of Chassell/Tapiola. Surviving children include Julie Evelyn Van Maren of Ft. Collins CO, William Niernberger of Ashland OR, Alice Elizabeth Pethe of Ft. Collins CO, and Haley Anne Cooke of Franklin Park IL. She has two grandsons, Zenen Van Maren and Rohkein Voimakas, and one granddaughter, Seija Van Maren.Surviving siblings include Bent John Pouttu of Elo MI, Paula Weeks of Houghton MI, Helen Cooke of Western Springs IL, and LindaSchumacher of Pinedale WY. She has one surviving aunt, LillianPouttu of Chassell/Tapiola MI. Surviving neices and nephews include Matt Pouttu­Clarke of Scotsdale AZ, Myla (Pouttu) Haider of University Place WA, Mark Pouttu Glass of Chesterfield VA, Leslie (Cooke) Danford of Chicago IL, Haley Cooke of Franklin Park IL, Ashli Schumacher of Kingston WA, Rachel Narhi Hamilton of Portland OR, Jason Schumacher of Seattle WA, William Schumacher of Boulder CO, Erik Karsama of Brussels, Belgium, Adrienne Loyd of Neenah WI, and Alec Jon Karsama of Waterford MI. Gail Pouttu has numerous cousins, many in the area, the grandchildren of both her parents pioneer families in Elo: Juho and Selma Pouttu of Pouttula/Ylistaro and Forssa in Finland and Emil and Ruusa Narhi of Heinoniemi and Pihtipudas Finland. She had 23 deceased aunts and uncles, most of them of Finnish descent. These pioneering families left Finland, entering the United States through New York and San Francisco between 1871 and 1909, carving their farms and homesteads out of the Michigan forests. They left an inspiring legacy to their many heirs. Services to honor the life of Gail E. Pouttu are scheduled by Plowe Funeral Services at 400 Memorial Drive in Houghton. There will be a wake from 5 to­7 PM on Monday September 26 at the funeral home,with a visitation Tuesday, September 27, 2016from 12 noon until 1 pm followed by aService at 1:00 PM at the Mission United Lutheran Church in Pelkie. Her burial will be in the Pouttu plot in Elo Cemetery. In lieu of flowers, donations arewelcome to Gail Pouttus memorial. For further information, see www.plowefuneralhome.com To send flowers to the family of Gail Pouttu, please visit Tribute Store
To order memorial trees or send flowers to the family in memory of Gail Pouttu, please visit our flower store.