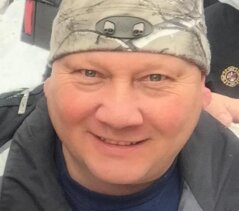 Gary D. Cote, 56, a resident of Chassell passed away Monday, March 7, at his home following a tenacious battle with cancer.

Gary was born on August 7, 1965, in Sault Ste. Marie, MI, a son to Rose (Maijala) Cote and the late Dean Cote. Gary was raised in Chassell and was a 1983 graduate of Chassell High School.

Following high school, Gary worked for Andrew Wisti, Chassell Carpentry, and served for an impressive 36 ½ years at UPS. Gary began his tenure at UPS washing trucks at night and eventually became a delivery driver. Gary’s route spanned the North end to Copper Harbor, and he caringly and loyally served customers that came to be more like friends for 27 years.
Gary was a man of many talents. He had a keen memory of names and dates, and a very quick wit that could not be matched. Gary cared for his community and formerly served on the Chassell Fire Department and was also a member of the Lions Club. He enjoyed the outdoors, hunting and making memories at “The Quiet Place”, fishing, 4-wheeling, watching Houghton Basketball and Hockey games and he cherished spending time with his adoring family his many friends.

Preceding Gary in death were his father Dean Cote and his daughter Missy Mertens.

Per Gary’s wishes, a casual memorial service for will be held at 12 PM on Saturday, March 12, 2022, at the Holy Trinity Lutheran in Chassell. Formal attire is not required. Please dress for your comfort.

To view Gary’s obituary or to send condolences to the family please visit www.memorialchapel.net.

In lieu of flowers, please consider going to GoFundMe and donate to “Help Gary and the Cote Family Fight Cancer” to help cover medical expenses.

The Memorial Chapel Funeral & Cremation Service Chassell Chapel has been assisting the family with the arrangements and we extend many thanks for their service.
To order memorial trees or send flowers to the family in memory of Gary Cote, please visit our flower store.