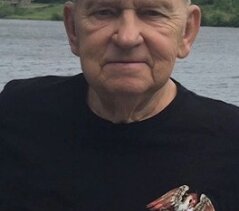 Houghton, MI George J. Butvilas Jr (76) of Houghton, Michigan died suddenly on 12/21/2021 at the home of his daughter in Marietta, Georgia where he was spending the holiday. Born on 11/9/45 to his parents the late George Sr and Adella Butvilas in Chicago where he spent most of his younger years. He graduated with honors from DeLaSalle High School in 1963 and was the captain of both the baseball and football teams. He received his appointment to the United States Naval Academy and graduated as an ensign with a degree in mechanical engineering on 6/7/67. He married the love of his life, Barbara, in the Academy chapel on 6/8/67. He completed many years of military service including two tours in Vietnam and was promoted to Lieutenant Commander in the USNR in 1978. In 1971 he began his career in banking as well as teaching. He started at American National Bank as Manager of Operations and Development and worked his way up to Vice President. He then served as Executive Vice President and COO of Boulevard Bank after which time he moved to Houghton in 1990 serving as President and CEO of D&N Bank. As the bank changed, he became Vice Chairman of Republic Bancorp, next the Director of Republic Banks Loan Committee, Chairman of Citizen National Banks Risk Management Department and eventually served on the Board of Directors for Citizens National Bank in Flint. Education was important to him. In 1987 he completed the Harvard Business School Advanced Management Program. He was an adjunct professor at MTU Business School, inducted into the Honor Academy of the Forestry Department at there in 1998, inducted into the Honor Academy of the Business Department and made Honorary Alumnus of the year at MTU in 2007. George believed strongly in service and community building. In 1991 he was appointed by President Bush as the Chairman of the National Veterans Development Corporation. He was co-chair of the Fundraising Committee at the Omega House in Houghton for a time, was on the Board of Directors for the Calumet Theater and served on the MTU Fund for 21 years. He was the managing Director of Quincy Hill Advisors helping local business people and Director of Facilities Management at MTU for a time. He is survived by his wife of 54 years, Barbara. His three children: Christiann (Tom) Rosemurgy of Houghton, Mike (Marcia) Butvilas of Houghton and Joellen (Mike) Razzano of Marietta, Georgia. His older sister Georgiann (George) Miller of Chicago. His sister-in-law Connie (Joseph) Eppel of Ontario. His grandchildren: Charlie Schmidt, Thomas (Cassie) Schmidt, Sam and Hannah Rosemurgy. Michael (Brooke Farrer) Vezzetti, Jillian and George W. Butvilas. Emily, Michael, Anthony, Bella and Joe aka Jim Razzano. His nieces: Suzanne (Dave) Stafford, Lisa (Ken) Dryier and their families of Chicago. His nephews Joey and Nick Eppel of Ontario. In lieu of flowers please consider a donation to the St. Ignatius Building Fund, the Naval Academy Foundation or to the Omega House in his memory. A Mass of Christian Burial for George will be held 1:00 pm Wednesday December 29, 2021, at St. Ignatius Loyola Church of Houghton with Fr. John Martignon to celebrate. Friends may call on Wednesday December 29, 2021, at St. Ignatius Loyola Catholic Church of Houghton from 10 am until time of services. To view Georges obituary or to send condolences to the family please visit www.memorialchapel.net. The Memorial Chapel Funeral & Cremation Service of Hancock has been assisting the family with the arrangements.
To order memorial trees or send flowers to the family in memory of George Butvilas, please visit our flower store.