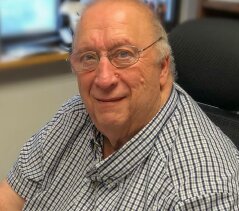 HANCOCKGerald David Jukuri, 81, a well-known local business man, passed away Tuesday afternoon at UP Health System-Portage surrounded by his family.Dave was born on November 21, 1939, in Calumet, the middle son of Emil and Lempi (Hendrickson) Jukuri and graduated from Calumet High School in 1957. He attended Michigan Tech University and later graduated from the Wisconsin Institute of Mortuary Science.On August 17, 1963, he was married to the former Barbara Ruth Tulppo in Calumet. He lived most of his life in Hancock except for 23 years in Oskar Bay.He served in the U.S. Naval Reserves until his discharge in December 1963.In 1964, he built Jukuri Funeral Home in Hancock along with an ambulance service and later the Mountain View Mortuary in South Range. He worked in the funeral business until 1990 when he started North Country Agency Appraisals and Century 21, North Country Agency. He was also the owner of Oskar Bay Construction Company.Dave was a member of the Zion Lutheran Church of Hancock. He was a proud member and president of the Quincy Mine Hoist Association and the Rice Memorial Clinic Foundation for many years. He also served on the Hancock Main Street Committee, was a former member of the Hancock City and Stanton Township Fire Departments, and Isle Royale Boaters Association. He served on the Boards of the Miners State Bank and the former South Range State Bank.He was a hockey enthusiast, having played for the CLK Radars, coached, refereed and was one of the founding members of the Houghton County Arena. He was a faithful supporter of all Michigan Tech sports, especially hockey and followed all college hockey very closely. Dave loved his boat (named Suzanne of Oskar) and enjoyed countless trips to Isle Royale with his faithful boat crew.Over the years, Dave was a friend and mentor to many people and took great pleasure in knowing that he was able to help them in some small way.Besides his parents he was preceded in death by his brothers, Gordon, John (Ruth), Lawrence, and James (Gail).He is survived by his wife, Barb; children, Suzanne (John) Sanregret, Karen (Erik) Kukkonen, Kristine (Jay) Weidner, David (Jessica); nine grandchildren, Matthew, Bradley, Trevor, Kyle, David, Brenden, Emma, Corben, Adam; sisters -in-law, Marilyn Jukuri, Theresa Jukuri, Rea (Jerry) Switzer, Carla (Bob) Rowe; many nieces, nephews, cousins and friendsFuneral services will be held Friday, August 13, 2021, at 11 a.m. at the Zion Lutheran Church in Hancock with Pastors Jesse Aho and Jay Weidner to officiate. Private family burial will be in the Lakeview Cemetery in Calumet. Friends may call at the Jukuri-Antila Funeral Home in Hancock from 4 to 7 p.m. Thursday and 1 hour prior to services at the church on Friday. Memorials may be directed to the Lahti Retreat Center, 400 Ingot Street, Hancock or the Inter- Lutheran Theological Seminary, P.O. Box 449, Hancock, MI 49930.The family would like to extend special thanks to the entire staff of Portage Health Hospice, especially Stacey, Karen and Lori for the care and assistance over the past 6 months. Arrangements are being handled by Memorial Chapel/Antila Funeral Home. Online condolences may be expressed to the family at www.memorialchapl.net.
To order memorial trees or send flowers to the family in memory of Dave, please visit our flower store.