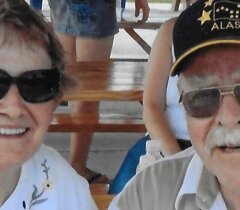 Obituary of Gerald Edward Kotila Houghton/Hancock Gerald E. Kotila, 83, a resident of the Bluffs Senior Living Community and former Hancock resident passed away the UP-Health System Portage Hospital Tuesday March 14, 2017, where he had been a patient for the past day.He was born on October 4, 1933, in Ripley, MI, a son of the late Eino and Sylvia (Virenius) Kotila. Gerry was a graduate of the Hancock High School and Michigan Technological University, where he received a degree in Mechanical Engineering.Mr. Kotila was a veteran having served with the United States Army. He then was employed with Ford Motor Company before beginning a career as a civilian employee with the Department of the Army. There he was a Fighting Tank Design Engineer and being assigned to the M-1 Tank Project. He was stationed for a while in Germany while working on the M-60-A1 tank. He also was stationed in South Korea, Egypt and Pakistan during his career.On August 20, 1955, he was united in marriage to the former Ann Michaelson. The couple raised two children together. On November 1, 2011, Ann preceded him in death.Mr. Kotila was a member of Gloria Dei Lutheran Church of Hancock. He was a gifted carpenter who was able to build several homes. He was an avid reader, who enjoyed World War II history. He had enjoyed traveling and was very active in his younger days.Surviving are: His children: Jeffery Kotila of Virginia, MNJulie (Pat Cogan) Kotila of Fairbanks, AlaskaHis grandchildren: Iloni (Jacob Stob) Kotila, Davin (Vallery) Kotila, Teija (Eric) Springer and Tomas (Kendra) KotilaHis four great grandchildrenHis sister: Judy Saaranen of Fountain Valley, CANumerous nieces, nephews and cousinsA memorial service for Gerald will be held 3 pm Saturday March 25, 2017, at the Memorial Chapel Funeral Home of Hancock with Rev. DJ Rasner to officiate. Spring burial will be in the Lakeside Cemetery of Hancock.To view Gerald's obituary or to send condolences to the family please visit www.memorialchapel.net.The Memorial Chapel Funeral & Plowe Funeral Homes of Hancock is assisting the family with the arrangements.Service Information To send flowers to the family of Gerald Kotila, please visit Tribute Store
To order memorial trees or send flowers to the family in memory of Gerald Kotila, please visit our flower store.