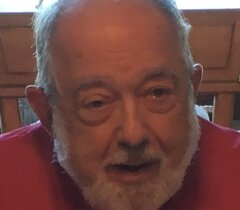 Gerald E. Wilkowski, 81, a resident of Dollar Bay, passed away Tuesday, April 19, 2022, at his home with his family by his side.
He was born on August 21, 1940, in Hubbell, to the late Edward and Clodie (McKinstry) Wilkowski. Gerald was raised in Calumet and graduated from Sacred Heart Catholic High School in 1958 and went on to attend Michigan Technological University.
On September 11, 1961, he was united in marriage to the former Janet Kerban. The couple resided in Iron Mountain before moving to Saginaw where they raised their family and where Gerald began his 30 years career for General Motors. In 1992, the couple moved back to the Copper Country residing in Chassell until moving in 2017 where they made their home in Dollar Bay.
Gerald was a member of both St. Anne’s Catholic Church in Chassell where he served as a lector and St. Francis of Assisi in Dollar Bay.
Besides his parents, he was preceded in death by a daughter, Amy, a sister, Joan Zanardi, and brother-in-laws Charles Zanardi and Joe Pleshe.
He is survived by his wife, Janet of Dollar Bay
His children: Stephen (Laura) of Midland, MI
Colette (Steve) Patchin of Bootjack
Kyle (Mackenzie) of Saginaw, MI
His grandchildren: Jordan (Darla), Taylor (Cody), Sean, Jake, Michael, Samuel, and Margaret, and one great-grandchild on the way.
Gerald is further survived by his sisters-in-law, Judy Pleshe, Michelle Kerban, Mary (Al) Eckhart, and Dee (Don) Moore and numerous nieces and nephews.

A Mass of Christian Burial for Gerald will be held at 11:00 am on Monday, April 25, 2022, at St. Anne’s Catholic Church in Chassell with Rev. Fr. Ben Hasse and Rev. Fr. Jubish Joseph to officiate. Burial will take place later this spring in the Chassell Cemetery.

Friends may call on Monday from 10 am until the time of mass at the church.
In lieu of flowers, the family asks that memorials be directed to a charity of your choice in memory of Gerald Wilkowski. The family would like to thank Dr. Todd Anderson, his staff and UP Home Health and Hospice for their amazing care.

To view this obituary or to send condolences to the family, please visit www.memorialchapel.net.
The Memorial Chapel Funeral & Cremation Service of Hancock is assisting the family with the arrangements.
To order memorial trees or send flowers to the family in memory of Gerald Wilkowski, please visit our flower store.