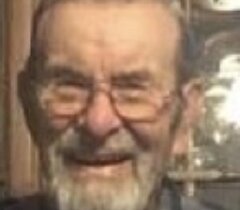 Houghton Canal Gordon R. Sarge Wiitanen, 94, a resident of the Houghton Canal and former Petoskey resident, passed away Wednesday, December 23, 2020 at Canal View – Houghton County following a lengthy illness. He was loved and appreciated by so many and devoted his life to those who served our country. He was born on October 6, 1926 in Atlantic Mine to the late Casper and Anna (Paavo) Wiitanen. Gordon attended Houghton High School and received an honorary diploma and graduated with the class of 2002. He was drafted into the United States Army in 1945 and retired as a Sergeant E-8 in Italy in 1966 after 22 years of honorable service. While in the Army, Gordon attended several courses of instruction specializing in Recruiting and Career Counseling. He also was trained in Atomic Demolition. Gordon fought in the Korean War and was a member of the Chosen Few. He was shot and wounded and received the Purple Heart. On January 5th, 1952, Gordon was united in marriage to the former Catherine Kruming. She preceded him in death on April 22, 1996. Following his retirement, Gordon moved back to the Copper Country taking a job in construction for over 20 years. He was instrumental in the renewal and rededication of Veterans Park in Houghton. In 2000, Gordon moved to Petoskey but still kept close to his roots and family in the Copper Country. In 2002, Gordon was diagnosed with esophageal cancer. His determination and strength helped him beat the odds of a 2 percent survival rate. Gordon was a long-time parishioner of St. Ignatius Loyola Catholic Church in Houghton, a Life-Member of the VFW Post 1292 in which he was the last Commander of this post until its demise, the American Legion Post 186 in Hancock, the Korean War Veterans Association, the National Association of Uniformed Services, the Retired Enlisted Association and the Laborers Union Local 1329. Gordon enjoyed being outdoors, gardening, hunting, fishing, and carpentry work. In the last several years he devoted much of his time to veterans organizations and continue to fight for veterans rights and services from his new community downstate. Besides his wife and parents, Gordon was preceded in death by his brothers Elmer, Clarence, John, Carl (Lil), Raymond, Ronald (Carole), Kenneth and a sister Katie. He is survived by his children: David of Chassell Mark (Sherri) of Houghton Canal Keith (Joan) of Houghton Canal Debra (Mack) Owen of Oregon Valerie (John) Despins of Ohio He is further survived by numerous grandchildren, great-grandchildren, nieces, nephews, cousins and other relatives and friends including special friend Shirley Neill of Petoskey. A mass of Christian burial for Gordon will be held at 10am, Saturday, August 14, 2021 at St. Ignatius Loyola Catholic Church in Houghton with Fr. John Martignon to officiate. The family asks that masks and social distancing are practiced while at mass. A graveside blessing with Military Honors for Gordon will be held in the Oskar Cemetery. To view this obituary or to send condolences to the family, please visit www.memorialchapel.net. The Memorial Chapel & Plowe Funeral Home of Houghton is assisting the family with the arrangements.
To order memorial trees or send flowers to the family in memory of Gordon Wiitanen, please visit our flower store.