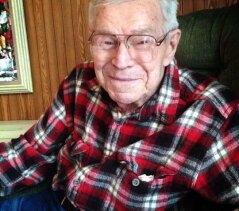 Obituary of Hugo H. Harkonen Chassell Hugo H. Harkonen, 95, a resident of Chassell passed away peacefully Friday morning July 15, 2016, at his home with his family by his side. He was born on February 13, 1921, in Atlantic Mine, a son of the late Herman and Manda (Timonen) Harkonen. He attended the Jeffers Schools and later in life graduated from Kimball High School in Royal Oak, MI. Hugo had worked in the CCC Camps before enlisting in the Coast Guard. He then began a career working security for General Motors, retiring in 1989 as Captain of Security of the G.M. Tech Center in Warren, MI. On May 25, 1946, he was united in marriage to the former Mildred Laitinen. The couple had resided in the Detroit area until Hugos retirement when they moved to make their home in Chassell. After 58 years, together Mindy preceded Hugo in death. Mr. Harkonen was a member of Holy Trinity Lutheran Church of Chassell. He was an active member of the Copper Country Bowling League for many years, was an avid Detroit Tiger and Detroit Red Wing Fan, and also enjoyed hunting, fishing and woodworking projects. Hugo loved to spend time with and build memories with his family, especially his grandchildren and great grandchildren. Preceding him in death were his wife, Mindy, his parents, his siblings, Lempi Peggy, Tienhara, Irene Laitinen, Ellen Hiltunen, Ruth Hiltunen and William Kenny Harkonen. Surviving are: His daughter: Linda (Chris) Marchese of Chassell His grandchildren:Amy Lyn (Jason) Tustin Jennifer Ann Wilson Alicia Ann (Christopher) Stewart His great grandchildren: Cade, Maxim Hugo, Axel, Alaina, Preston Hugo, Grayson & Levon Numerous, nieces, nephews and cousins A special Friend: Dennis Karvakko of Chassell Funeral services for Hugo will be held 1 pm Friday July 22, 2016, at the Holy Trinity Lutheran Church of Chassell with Rev. Joe Iverson to officiate. Burial will be in the Forest Hill Cemetery of Houghton. Friends may call on Thursday July 21, 2016, from 5 to 8 pm at the Memorial Chapel Funeral Home of Chassell and on Friday from 12 noon until time of services at the church. Hugos Family would like to thank his caregivers Barbara Buth, Sara Mars, and Roger Puska and Aspirus Keweenaw Home Health & Hospice, especially his aides Roger, and Debbie for the wonderful care given to Hugo during his illness. To view Hugos obituary or to send condolence to the family please visit www.memorialchapel.net. The Memorial Chapel & Plowe Funeral Homes of Chassell have been assisting the family with the arrangements. To send flowers to the family of Hugo Harkonen, please visit Tribute Store
To order memorial trees or send flowers to the family in memory of Hugo Harkonen, please visit our flower store.