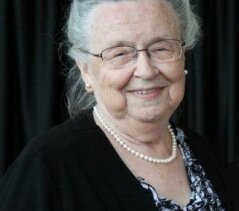 Houghton Ingrid E. Puuri, 89, a resident of the Bluffs Senior Living Community and former Liminga resident passed away Thursday morning June 11, 2020, at her home following a short illness. She was born on September 16, 1930, in Jacobsville, MI, a daughter of the late Leonard and Katherine (Waisanen) Peltola. Ingrid was raised in Jacobsville and Alston, MI and was a graduate of the Baraga High School. Ingrid moved to Hancock after high school where she had worked as a nanny and waitress. On March 25, 1950, she was united in marriage to Edwin Puuri. The couple resided in Liminga where they raised their six children. On September 13, 2004, Edwin preceded Ingrid in death. On August 4, 2007, Ingrid was united in marriage to Milton Anderson, the couple had resided in Liminga until moving to make their home at the Bluffs Senior Living Community in Houghton. On July 17, 2019, Milton preceded Ingrid in the death. Mrs. Puuri was a lifelong member of the Zion Lutheran Church in Hancock where she was active with WMO and taught Sunday School for many years. She enjoyed needlework projects, being active with 4-H for many years and spending time with children and her family. Ingrid Also had worked as a Teachers Aide for Head start, in the kitchen at Soumi College (Finlandia University) and retired from Cypress Manor Nursing Home where she was a CNA. Preceding her in death were her husbands Edwin and Milton, her parents and her sister Irma Narhi. Surviving are: Her children: James Puuri of Columbia Falls, MT Joanne Hodges of Hancock Duane (Brenda) Puuri of Houghton Matthew (Pauline) Puuri of Kalispell, MT Joyce (Steve) Smith of Marquette Thomas Puuri of Elo 19 Grandchildren 17 great-grandchildren Her step-daughter: Karen (Dan) Flora of Shelby Township 2 step-grandsons Her sister & brothers: Irene Fontenot of Shreveport, LA Charles (Diane) Peltola of Marquette Clifford (Gloria) Peltola of Stoughton, WI Numerous nieces, nephews and cousins Funeral services for Ingrid will be held 11:00 am Tuesday, June 16, 2020, at the Zion Lutheran Church of Hancock with Pastor Jesse Aho to officiate. Burial will be in the Liminga Cemetery. Friends may call on Tuesday, June 16, 2020, from 10:00 am until time of services at the Zion Lutheran Church of Hancock. Ingrid's family would like to thank the staff's of the Bluff's Senior Living Community, UP Health Portage Hospital and UP Health Home and Hospice for the care given to Ingrid. To view Ingrid's obituary or to send condolences to the family please visit www.memorialchapel.net. The Memorial Chapel & Plowe Funeral Homes of Hancock are assisting the family with the arrangements.
To order memorial trees or send flowers to the family in memory of Ingrid Puuri (Peltola), please visit our flower store.