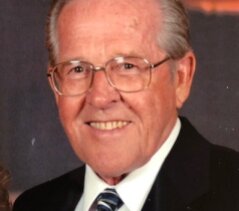 Houghton Canal Jack Kolehmainen age 87, passed away peacefully at his home on August 5, 2021. He was born in Chassell and raised in Redridge, Mi. Preceding him in death were his parents Henry and Olga (Marttila)Kolehmainen, brother Gordon and sister Jean. At 17, Jack joined the U.S. Naval Reserves. He graduated from Michigan Tech and took employment with Ford Motor Company in Detroit. He was a Senior Supervisor Engineer in Transmissions for 35 years. After retirement, he and his wife Betty Ann returned home to the U.P. Jack and Betty Ann recently celebrated 65 years of marriage. Their life was filled with adventure traveling by land, air and sea. Jack is survived by his wife, 6 children, 19 grandchildren and 13 great-grandchildren. Jack enjoyed playing baseball and hockey throughout his life. He was a successful hockey coach and had been President of Redford Hockey Association. He was also an avid hunter and fisherman. Jack loved to tell stories filled with laughter. He was a man of many talents and enjoyed sharing his knowledge with others. Jack will be truly missed by his immediate family, his brothers Floyd and Robert, sister/bother-in-laws, nieces and nephews. A memorial service will be held at Zion Lutheran Church in Hancock, Mi. at 1pm on Wednesday, 8/18 /21. Visitation one hour prior to service. His honorary pallbearers will be grandsons Garrett, Jordan, Ryan, Cole, Evan and Kyle.To view Jacks obituary or to send condolences to the family please visit www.memorialchapel.net.The Memorial Chapel Funeral Home of Hancock has been assisting the family with the arrangements.
To order memorial trees or send flowers to the family in memory of Jack Kolehmainen, please visit our flower store.