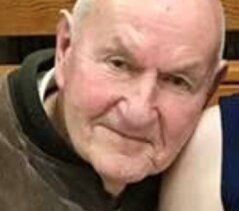 Atlantic Mine John Jack Laux, 86, a resident of Atlantic Mine and former Houghton business owner passed away Tuesday, November 2, 2021, at the Omega House in Houghton following a lengthy illness. He was born on March 7, 1935, in Houghton, MI, a son of the late Adolph and Estelle (Edgerton) Laux. Jack was raised in Houghton and a graduate of Houghton High School. Jack was a veteran, having served with the United States Army 82nd Airborne as a Paratrooper. Jack returned to the Copper Country and attended Northern Michigan University. On August 30, 1958, he was united in marriage to the former Donna Hocking. The couple resided in Marquette before making their home in Atlantic Mine. Jack worked for Hocking Construction Company. He later owned and operated Jack's Shell Service in Houghton for many years. He retired from Houghton-Portage Township Schools having worked as a bus driver and custodian. Jack excelled as an athlete, particularly Football, where he starred for the Gremlins and played in the Inaugural Copper Bowl Game Between Houghton and Hancock (which Houghton won by the way). Jack later played Football while in the Army and for Northern Michigan University. His love of the game never waned and he cherished watching his sons and grandson play and reminiscing with his many friends whom he shared those days with. He was a long time fan of the Green Bay Packers Jack was an active member of Holy Family Catholic Church of South Range. He was a Lifetime member of the Lake Superior Beagle Club and a former member of the Houghton Lions Club. Jack loved life, but more than that he loved the people in his life. This love is credited with his having survived long past the time his body attempted to part ways with this world. You were a stranger but once, whether you wanted to be or not. Jack loved conversation and could start one with anyone, anywhere. He was witty and funny and, especially in his younger days a big practical joker. He could receive as well as dish it out and many are the humorous stories of jokes played on or by him, shared with friends, relatives, co-workers, even his health care and hospice staff. Being the lover of people he was, if you were a friend, you were a friend for life no matter the time or distance. He never forgot anyone. Ever. Although his sight largely left him a decade ago, Jack would instantly recognize people from their stature, mannerism and voice.Although Jack's physical ability and eyesight diminished over the years he did not allow that to interfere with any task he set his mind to. He took meticulous care of his tools and organized everything in his life to allow him to complete tasks. Jack loved the out of doors; bird, deer, rabbit hunting with hounds, and stream fishing. It was seldom if ever about the quarry, rather the process, time in nature and the journey's with friends and family that Jack treasured most. He was grateful to have these memories and stated recently although his arms and legs could no longer carry him, he only needed to close his eyes and he was there again.Jack loved to sweat and work hard. He took great pride in building the Family Camp in Twin Lakes in 1980. If there was a favorite place in this world, it was there with his Wife and Family.Jack treasured a hard work ethic, honesty and humility. It rubbed off on those around him. He always had a soft spot for the underdog, in many ways, being one too. He often went out of his way to help those in need, more than once borrowing money he didn't really have to lend, inviting people into his home who needed a hot meal and a few nights rest, or just lending a word of encouragement or sharing his life's struggles with someone who may be going through something similar.Jack was an imperfect person. He would be the first to tell you so, but his heart was Gold. Jack was proud of his sobriety, readily admitting he was an alcoholic; recovered for well over fifty years. Through his faith, conviction and devotion to his wife Donna and their children he put his addiction past him, rose above it and became a better Man because of it. Right up to his last day Jack strove to be a better Man than he was the day before. Preceding him in death were his parents, brothers and sisters: Jim Laux, Ann Hafkemeyer, Dorothy Madigan, Corbin Laux, Marbeth Jackovic, Mary Montgomery and Rudy Laux, his son-in-law: Don Tickler and best friend: Julio Traglia. Jack had many friends too numerous to mention whom he thought the world of. Mario, Spence, Julio, Jerry and the rest, The Gang is back together! Surviving are: His wife: Donna Laux of Atlantic Mine; His children: Jacalyn Laux Tickler of Gwinn, Denise (Richard) Hudson of Marquette , Tony (Betsy) Laux of Chassell, John (Dana) Laux of Travelers Rest, SC, & Steve (Brenda) Laux of Chassell; His grandchildren: Erica Tapani, Tony Laux, Amelia Laux, Madalyn Laux, Annika Laux and Finley Laux; His great-grandchildren: Alexis and Levi; Numerous nieces, nephews and cousins and his lap buddy Sophie. A Mass of Christian Burial for Jack will be held 11:00 am Saturday, November 6, 2021, at the Holy Family Catholic Church of South Range with Fr. John Martignon to officiate. Burial will be in the Mt. View Cemetery of South Range where military honors will be conducted by the Copper Country Veterans Association. Friends may call on Saturday, November 6, 2021, from 10-10:45 am at the Holy Family Catholic Church of South Range. Memorials can be sent to the Omega House, Little Brothers, C.C. Human Society or a charity of your choice. To view Jacks obituary or to send condolences to the family please visit www.memorialchapel.net
To order memorial trees or send flowers to the family in memory of Jack Laux, please visit our flower store.