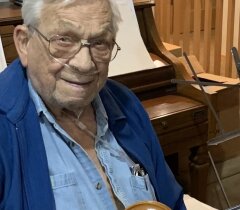 Chassell Edward Jack Rossberg, 92, of Chassell passed away peacefully on Tuesday, January 12 at the home of his daughter, Kathy, in Hudson, WI surrounded by his family. He was born on December 9, 1928, in Calumet, MI, son of the late Edward and Gertrude (Keranen) Rossberg. Jacks father was a Coast Guard officer, so he lived in many places where his father was stationed, including San Luis Obispo, CA, Grand Marais, MN, and Pelkie, MI. He graduated from Munising High School in 1946 and served for two years in the Naval Reserve. He married Bertha (Haapala) Rossberg on February 7, 1953. Jack spent his career as a master plumber and was also a member of the Copper Country Lodge No. 135, but music was his passion. Anyone who shook his hand marveled at his extraordinary gift on the violin! He and Bertha spent many hours playing for different events and church services over the years as a violin/piano duo. Jack also enjoyed being a part of a local Kantele group, beating his kids and grandkids at cribbage, grumbling about or praising either the Tigers, Red Wings, or Packers depending on the season, telling or hearing a good joke, and a good round of golf (one time including a hole-in-one). Jacks faith in the Lord was evident through his and Berthas daily scripture readings and as life-long members of Holy Trinity Lutheran Church in Chassell. Jack deeply loved his girls, and told Bertha and his daughters prior to passing that he saw the Lord waiting. He is survived by his wife of (almost) 68 years, Bertha of Chassell, four daughters, Kathryn (John) Whitegon of Hudson, WI, Linda Rossberg of Marquette, MI, Susan Rossberg (Keith Shepard) of Littleton, CO, and Lori (Mark) Voss of Hudson, WI, four grandchildren, Shawn Rossberg, Maija Whitegon, Ryan and Lauryn Voss, step-grandchildren, Barb (Michael) Jennings, Tracy (Todd) Korpi, Chad Persha, Kris and Josh Shepard, and Aaron Loehr, and step great-grandchildren, Michael Jennings, Carter, Cameron, and Keegan Korpi, and numerous nieces, nephews, cousins and many special friends. He was preceded in death by his parents and sons-in-law Gary Loehr and Nick Persha. Special thank you to Dr. Thomas McConnon and the staff at Upper Great Lakes Family Health Center for taking such great care of Jack over the years. Visitation will be held at Memorial Chapel in Chassell on Monday, January 18th from 3:00 pm to 7:00 pm following COVID guidelines. Due to pandemic restrictions, a private family service will be held the following day at Holy Trinity Lutheran Church in Chassell. Burial will take place later this spring in the Chassell Cemetery. In lieu of other expressions of sympathy, the family suggests donations to Holy Trinity Lutheran Church or the charity of your choice. To view Jacks obituary or to send condolences to the family please visit www.memorialchapel.net. The Memorial Chapel & Plowe Funeral Homes of Chassell have been assisting the family with the arrangements.
To order memorial trees or send flowers to the family in memory of Jack Rossberg, please visit our flower store.