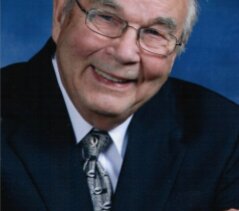 Obituary of James Andrew Mickelsen ChassellJames A. Mickelsen, 92, of Chassell, passed away peacefully on January 22, 2019, at his home.He was born January 7, 1927, in Minneapolis, MN, son of Rev. Andrew Mickelsen and Mary Bikkie Mickelsen. Jim was a graduate of Hancock Central High School with the class of 1945. He graduated from Michigan Technological University with a degree in Mechanical Engineering in 1949.Jim was united in marriage to Mary Lou Heikkila Mickelsen on April 8, 1950. The couple resided in Bloomfield Hills, MI, until returning to make their home in the Copper Country in 2008.Jim worked in consulting engineering for 15 years and then worked as Associate Director for the Oakland Community College in the Office of Physical Facilities until his retirement on September 27, 1991.He & his wife were active in the Southfield and Northville Apostolic Lutheran Churches all the years of their marriage. Mary was the organist, with Jim serving the Sunday School, Board and Building Committee. After Pastor Elmer Liimatta retired in 1995, Jim served as pastor for several years until a permanent pastor accepted the appointment.Preceding him in death were his parents; sister Naomi Johnson; wife Mary Lou; granddaughter Mary Elizabeth Mickelsen; sister-in-law Margaret Olsen; brother-in-law Ross Wolfe; daughter Rebecca (Stan) Kozyra; and son Thomas Mickelsen.Surviving is his son Robert (Tess) Mickelsen. Grandchildren Jessica Mickelsen (Rob) Simon; James Mickelsen; Jennifer Kozyra (Craig) Leduc; Erik Kozyra; Craig Mickelsen; Eirinn Cunningham; and great-granddaughter Brooklyn Leduc. Sister Joyce Tibbs (Stewart Lee); sister Norma (Robert) Nominelli; sister Fayth Wolfe; brother David (Marilyn) Mickelsen. He is also survived by many favorite nieces, favorite nephews, cousins and dear friends.Visitation for James will be held at the Zion Lutheran Church in Hancock, Saturday, March 9, 2019, at 11 am, followed by funeral service at 12 noon with pastors Jesse Aho and Arvo Onnermaa officiating. Spring burial will take place in the Lakeside Cemetery of Hancock. In lieu of other expressions of sympathy, the family suggests memorials in Jims memory be given to either Zion Lutheran Church or Inter-Lutheran Theological Seminary.To view Jims obituary or to send condolences to the family please visit www.memorialchapel.net.The Memorial Chapel & Plowe Funeral Homes of Hancock are assisting the family with the arrangements. To send flowers to the family of James Mickelsen, please visit Tribute Store
To order memorial trees or send flowers to the family in memory of James Mickelsen, please visit our flower store.