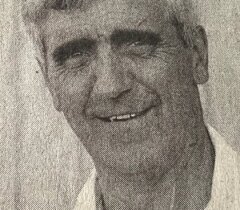 John “Topper” Ricci, 83, a lifelong resident of Hancock passed away February 12, 2022, at the Omega House in Houghton from complications with prostate cancer.

He was born February 19, 1938, in Hancock, the son of the late Joseph and Isabelle (O’Brien) Ricci. Following graduation from Hancock High School in 1955, he worked as a Delivery Driver and Manager at Houghton Bottling Company for 52 years.

John was united in marriage with Kay Grondine on May 27, 1958, the couple resided in Hancock where they raised 4 children.

Topper enjoyed officiating hockey, working 30+ years in the College ranks (WCHA & CCHA) where he officiated 5 National Championship Games. He also officiated over 600 High School Hockey Games, including many state championship games. He also loved playing softball and golf. He was inducted into both the UP Sports Hall of fame and Michigan Softball Hall of Fame in 1996. John was also selected to the Hancock High School Sports Hall of Fame in 2019.

Preceding him in death ere his parents, his son Ray, his brother Joe and sisters Mary and Catherine.

Topper’s family would like to thank the wonderful staff of the Omega House for the care given to him during his stay.

Per John’s wishes, a private family service will be held later this spring.

Memorial contributions in Topper’s memory may be given to the Omega House in Houghton.

To view Topper’s obituary or to send condolences to the family please visit www.memorialchapel.net.

The Memorial Chapel Funeral & Cremations Service of Hancock has been assisting the family with the arrangements.
To order memorial trees or send flowers to the family in memory of John Ricci, please visit our flower store.