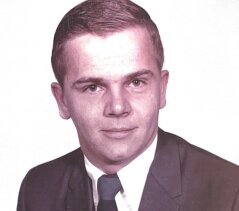 HANCOCK, MI – Jon W. Ahola, age 72, a resident of Hancock, passed away on Sunday, June 5, 2022, at Portage Point of UP Health System following a 3 year illness.
Jon was born on November 7, 1949, in Hancock, Michigan, son of the late Wilbert and Lillian Pyykkonen Ahola (Sterbis). He was a lifelong resident of Hancock and graduated from Hancock Public Schools in 1967. He enlisted in the Army National
Guard of Michigan and received an Honorable discharge after six years. He also pursued a Criminal Justice degree at Suomi College and graduated in 1976.
He married the former Carole Liimatta on August 3, 1968 and would have been celebrating 54 years of marriage this August.
Jon started his career in 1968 as an apprenticed mortician and Mercy ambulance attendant. He then changed career paths to pursue law enforcement. His 38-year career in law enforcement began as an officer with the Hancock City Police Department. He then transitioned to the Houghton County Sheriff’s Department as a deputy and later as a detective with the Tri-County Area Detectives. In 1982, he became the Chief of Police for the City of Hancock and finished his career as the Director of Public Safety at Michigan Tech University.
During his career in law enforcement, he also taught Criminal Justice at Suomi college for 27 years and was instrumental in shaping their curriculum.
Upon retiring, Jon and Carole would spend their winters in sunny Mesa, Arizona, and their summers in the beautiful Copper Country. He was a lifelong member of Gloria Dei Lutheran Church, a member of the Elks Club, BPOE#381, an avid golfer and member of Wyandotte-O’mers and Portage Lake Golf Clubs, and a youth baseball coach.
He was preceded in death by his parents, his brother, James E Ahola, and brothers-in-law, Kenneth and Paul Liimatta.
Surviving him are his wife Carole, his loving companion of over 53 years; son and daughter-in-law Jon and Rebecca Ahola; daughter and son-in-law Janelle and Wes Schneider; grandchildren; Alexia and Sana (Ahola); Chase and Carsten (Schneider); sister Carole and John Henderson; sister in-law Chris Ahola; sister-in-law and brother-in-law, Doris and Doug Moyle; several nieces, nephews and cousins.
Funeral services for Jon are scheduled for Friday, June 24, 2022 at 11:00 at the Gloria Dei Lutheran Church in Hancock with Pastor Brahm to officiate. Friends may call at the church from 10:00 until the time of the funeral service. Friends may also pay their respects to the Family on Thursday, June 23, from 4:00 to 6:00 at the Memorial Chapel Funeral Home in Hancock.
In lieu of flowers, memorials may be made to Gloria Dei Lutheran Church, Omega House, and Finlandia University to support Annual Scholarships enrolling in the Criminal Justice Program.
Jon’s family would like to acknowledge the wonderful care and support from the staff at Portage Pointe.
He will be missed.
To view Jon’s obituary or to send condolences to the family please visit www.memorial chapel.net
The Memorial Chapel Funeral and Cremation Service of Hancock is assisting the family with the arrangements.
To order memorial trees or send flowers to the family in memory of Jon Ahola, please visit our flower store.