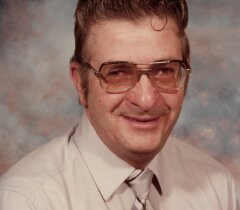 Obituary of Joseph Eugene DeForge Houghton Joseph E. DeForge, 89, a former resident of Superior Location, passed away Thursday November 29, 2018, at the Houghton County Medical Care Facility in Hancock where he had been a resident for the past five years. He was born on January 5, 1929, in Painesdale, MI, a son of the late Joseph and Kathryn (Grentz) DeForge. Joe was raised in Seberville and attended the Jeffers School until he had to go to work to help his family. Joe was proud that he was able to go back and receive his GED at the age of 40 from Jeffers High School. Mr. DeForge was a veteran having served with the United States Army. On June 7, 1952, he was united in marriage to the former Theresa Beauchamp. The couple had resided in Superior Location for over 50 years where they had raised their 6 children. The couple then moved to make their home at the Arbor Green Senior Living Community in Houghton. On November 3, 2007, Theresa preceded Joe in death. For the past five years Joe has been a resident patient at the Houghton County Medical Care Facility. Joe was an active member of St. Marys Star of Sea Church, where he sat of the parish council before he became a member of St. Ignatius Loyola Catholic Church in Houghton. Joe had worked for Herman Gundlach Construction Company before going to the maintenance department at the Portage View Hospital where he retired from. He also enjoyed sharing his carpentry talents and sat on the selection committee for Habitat for Humanity. He enjoyed spending his free time outdoors hunting, fishing and camping. He also enjoyed trains and working on his model plane. Joe was also a talented Cake maker and was happy to make cakes for all kinds of birthdays, weddings, graduations and other events. Preceding him in death were his wife, his parents, his sister, Gertrude Durocherand his brother George DeForge. Surviving are: His children: Darlene (Bernard) Lajimodiere of Lakewood, CO Joseph (Christine) DeForge of Baltic Edward (Diane) DeForge of Lake Linden Charlene (Dale) Momenee of Laurium Randall (Marlaine) DeForge of Union, OH Donald (Julie) DeForge of Dodgeville, 16 grandchildren and 22 Great grandchildren Siblings: Margaret Trasti, Kathryn Persha, Diane Meyers and Gloria Dairo Numerous nieces, nephews and cousins A Mass of Christian burial for Joe will be held 11:00 am Tuesday, December 4, 2018, at St. Ignatius Loyola Catholic Church in Houghton with Fr. John Martignon to officiate. Spring burial will be in the Forest Hill Cemetery. Friends may call on Tuesday December 4, 2018, from 9:00 am to 10:45 am at St. Ignatius Loyola catholic Church in Houghton. To view Josephs obituary or to send condolences to the family please visit www.plowefuneralhome.com The Memorial Chapel & Plowe Funeral Homes of Houghton are assisting the family with the arrangements. To send flowers to the family of Joseph DeForge, please visit Tribute Store
To order memorial trees or send flowers to the family in memory of Joseph DeForge, please visit our flower store.