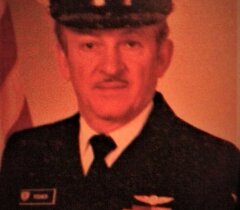 Obituary of Joseph Anthony Podner Atlantic Mine Joseph A. Podner, 94, a resident of Atlantic Mine, passed away Saturday, July 13, 2019 at the Houghton County Medical Care Facility in Hancock where he had been a resident for the past month. He was born on August 9, 1924, in Painesdale, the 7th child of the late Joseph and Francis (Gregorich) Podner. Joseph grew up in the Painesdale area until he had enlisted with the United States Navy in 1942 serving in World War II. When he returned home in 1946, he received his GED from Houghton Schools and began attending Suomi College. After one year there, he enrolled at DeVry in Chicago earning a degree in Engineering. On November 9, 1946, he was united in marriage to the former Estelle Karpinen. She preceded him in death in 1985. Joseph was employed for Burroughs Corp. in Detroit where worked as an electronics engineer for 30 years. During his career, he continued to be active with the US Navy by re-enlisting as a reserve eventually attaining the rank of Chief Petty Officer First Class. He retired after 30 years of service. Joseph was a devoted catholic and was a member of St. Ignatius Loyola Catholic Church in Houghton. He was a lifetime member of the VFW. He enjoyed bowling, amateur radio, playing horseshoes, making wine, and loved dancing. Besides his parents and his wife, Joseph was preceded in death by his 6 siblings and his son Keith. He is survived by his children: Craig (Deb) Podner of Missoula, MT Cathy (Michael) Peterson of Tapiola granddaughter Elisha of Pewaukee, WI great-grandchildren Joseph, Daniel and Jessica great-great grandchild Connie His life partner Faye Bennett of Calumet Fayes children, grandchildren and great-grandchildren A niece, Joy Riutta and nephew Raymond Fox. A Mass of Christian Burial for Joseph will be held 11am Tuesday, July 23, 2019 at St. Ignatius Loyola Catholic Church in Houghton by Fr. John Martignon. Burial with military honors will be held 1:30pm in the Mt. View Cemetery in South Range. Friends may call Monday, July 22, 2019 from 4-7pm at the Plowe Funeral Home in Houghton where a parish prayer service will be held at 6:00pm. In lieu of other expressions of sympathy, the family asks that donations be made to a charity of your choice. To view this obituary or to send condolences to the family, please visit www.memorialchapel.net. The Memorial Chapel & Plowe Funeral Home of Houghton has been assisting the family with the arrangements. To send flowers to the family of Joseph Podner, please visit Tribute Store
To order memorial trees or send flowers to the family in memory of Joseph Podner, please visit our flower store.