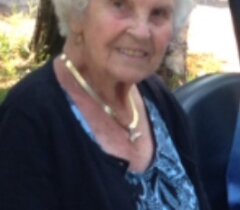 Joyce W. Penegor, Hancock, formerly of Twin Lakes and Ontonagon, passed away peacefully on November 18, at Portage Pointe, where she was a resident for nearly two years. Prior to that, Joyce lived at the Bluffs apartments in Houghton for a year and a half. Joyce was born on July 10, 1931, in Ontonagon, MI to the late Lillian (Arkelin) and Ray Harnish. She graduated from Ontonagon High School in 1949. Her first jobs were caddying for her father on the golf course and working at the family grocery store, the Market Basket in Ontonagon. After high school, she worked at the Rogers Agency and as the secretary to the head of the paper mill in Ontonagon until she married. Joyce married William (Bill) Penegor on Sept. 24, 1952, and they celebrated their 59th anniversary before his passing in December of 2011. They first resided at and helped operate the family farm on Greenland Road for eleven years and then moved to Ontonagon where they raised their four children. On the farm, Joyce cooked for the farm hands. She enjoyed bowling, golfing, snowmobiling, cooking, watching the Packers, and was a member of the Toastmistresses club, the Greenland Study club, and the Methodist church. She also volunteered for the Ontonagon Cancer society. Joyce was a long-time member of the Wyandotte Womens golf league in Twin Lakes. One year (not that long ago) she won what the grandchildren referred to as the Gram slam, three different golf events. Joyce and Bill enjoyed spending their summers at their cottage in Twin Lakes on Lake Gerald and had many wonderful family gatherings. They also were snowbirds for over thirty years in Fort Pierce, Florida where all the kids loved to come and visit. Surviving are her children Jerry (Terry Wuorinen) Penegor of Painesdale, Almor (Kathy) Penegor of Twin Lakes, Andrea (Guy) Longhini of Twin Lakes, and Marcia (Mike) Butvilas of Houghton; Grandchildren Jerry (Amanda) Penegor, Alicia (Kiel) Roeschke, Joe Penegor, Maren (Peter) Rouleau, Alison (Chris) Pasiuk, Bill (Matteson) Penegor, Valery Longhini, Kenton (Alyssa) Longhini, Brendan Longhini, Michael Vezzetti, Jillian Butvilas, and George Butvilas; Great grandchildren Madden and Brady Penegor; Emma and Luke Roeschke; Kaelyn, Jordyn, and Gavin Rouleau; Luciann and Lily Pasiuk; Woodson and Remington Penegor; Rease and Shaya Pakkala; and Kenli Longhini; sister-in-law, Jeanette Huotari of Mass City; brother-in-law, John Killmar of Houghton/Fort Pierce; uncle, Roy Arkelin of Texas; and numerous nieces, nephews, cousins, and friends. Joyce was preceded in death by her husband, Bill, daughter Gay Ann, her parents, and her sister, Janice Killmar. Joyce was a generous and loving mother and grandmother that will be missed very much. The family thanks the employees of Portage Pointe for the loving care they gave to Joyce. Funeral services for Joyce will be held on Dec. 5 at Memorial Chapel in Hancock. Visitation will be from 10 am – 1 pm with a prayer service held at 1 pm. In lieu of flowers, donations may be made to the Painesdale United Methodist Church, 156 Iroquois St, Painesdale, MI 49955 or the charity of your choice.
To order memorial trees or send flowers to the family in memory of Joyce Penegor (Harnish), please visit our flower store.